Be especially careful therefore of any idealized role or self-image, like that of minister, mother, doctor, nice person, professor, moral believer, or president of this or that. These are huge personas to live up to, and they trap many people in in lifelong delusion.

Chapter 10 was called “A Bright Sadness”. Chapter 11, entitled “The Shadowlands”, deals with darkness that contrasts brightness. Specifically, the darkness that is generated during our first adulthood – the creation of our shadow selves. An identity based in a job, role or other performance-based expression is a shadow. Father Rohr notes that this shadow persona “…is what most people want from you and reward you for, and what you choose to identify with, for some reason.” One way to tell if you’re interacting with someone else’s shadow? “Whenever ministers, or any true believers, are too anti-anything, you can be pretty sure there is some shadow material lurking somewhere nearby.” He says this shadow self shouldn’t be a permanent expression of who we are becoming. “Your self-image is not substantial or lasting; it is just created out of your own mind, desire and choice – and everybody else’s preferences for you!”

He notes that the final years of our lives give us an opportunity to either see and resolve this division or to dig in and cling to the image our shadow self has perfected. Those working with hospice patients have a front-row seat to see the fruits of both types of choices, and we are wired to recognize the difference by the arc in stories (heroes grow and change by facing their shadow, villains don’t).

Our shadow self makes us all into hypocrites on some level. Remember, hypocrite is a Greek word that simply means ‘actor’, someone playing a role rather than being ‘real’.

“Christians could have been done a great service if shadow had been distinguished from sin. Sin and shadow are not the same. We were so encouraged to avoid sin that many of us instead avoided facing our shadow, and then we ended up ‘sinning’ even worse – while unaware besides!” Rohr suggests that we pay attention to our overreactions or overdenials because we may just hear the crowing of a rooster at dawn if we listen closely enough. “Once you have faced your own hidden or denied self, there is not much to be anxious about anymore, because there is no fear of exposure – to yourself or to others. The game is over – and you are free.”

This freedom comes at a high cost. “Holy sadness, once called compunction, is the price your soul pays for opening to the new and the unknown in yourself and in the world, ” he writes. We have to go through it, and feel it for ourselves. Rohr observes that our competitive society makes it especially difficult for men, who often find it especially easy to push the sadness inside and end up with a very real and entrenched case of depression.

One of the great surprises is that humans come to full consciousness precisely by shadowboxing, facing their own contradictions, and making friends with their own mistakes and failings. 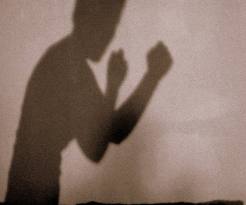 The observations in this chapter are of great value, though they don’t break new ground in the book. I found myself pondering the importance of climbing into the ring in order to face Shadow Michelle for another round, and also wondered how I can be the kind of person who helps others to step into their own ring, too. Being honest about what I’m discovering about God and myself is the single thing I can offer to others.

I spent some time this week with someone who has spent hours training in the “soul gym” for years, but refuses to actually lace up her gloves and fight her own shadow. She knows she is stuck, and has been for the last several years, but the fear of losing all she’s accumulated in the first half of her life keeps her from moving forward. She’s had very wonderful first adulthood, and I can understand why she is trying to hold onto the past instead of moving into the future. It doesn’t appear she likes this “stuck” place; she talks about it endlessly. But stuck has its own kind of comfort to it, and a step into the ring is a leap of faith.

When you’ve been stuck, what sorts of things have helped you take that leap?