Father Rohr entitled this chapter “A Bright Sadness”, explaining that though there is still darkness in the second half of our lives, growing adults have “a changed capacity to hold it creativity and with less anxiety”. If we are cooperating with the God’s gift of maturity, we will find we have less tolerance for nursing old grudges or rushing to judgement as we did when we were younger. “You learn to positively ignore and withdraw your energy from evil or stupid things rather than fight them directly,” he notes.

By taking on evil as if we’re God’s A-Team, we learn that another kind of evil ferments inside of us. This evil takes on the form of an inflated, distorted sense of our own importance, and the rage/revenge of those we’ve placed in our cross-hairs. At midlife, we are given the gift of “a spectrum of responses…and they are not all predictable, as is too often the case with most knee-jerk responses.”

Rohr suggests that those who have grown into their God-given role as sage elders bring the gifts of presence, of gravitas and of few but well-chosen words to a situation. (Woe unto me – I am a woman whose soul is a poorly-organized warehouse of words with every loading dock door wide open!) He writes, “If you talk too much or too loud, you are usually not an elder.” Ouch. 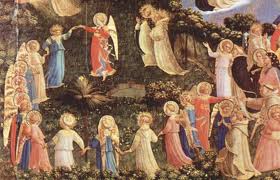 It is what makes us alike that brings joy in the second half. In the first half, we are struggling to differentiate ourselves from others – from our families, from our friends and enemies, from the status quo we see around us. “In the second half of life, it is good just to be a part of the general dance. We do not have to stand out, make defining moves, or better than anyone else on the dance floor. Life is more participatory than assertive, and there is no need for strong or further self-definition. God has taken care of all that, much better than we ever expected.”

As competition gives way to cooperation, we become, in Erikson’s developmental parliance, generative people. Generative people are those able to “generate life from (our) own abundance and for the benefit of following generations.”

“They once defended signposts, now they have arrived where the signs pointed.”

In this generative stage, we’re no longer driven to try to change others. As this drive recedes into our first half past, our maturity often gives us the authority to spur change. Ironically, that authority becomes less important to us in our second half lives, a parable that echoes the kingdom words of Jesus. “This is human life in all its crowning, and all else has been preparation and prelude for creating such a human work of art. Now we aid and influence other people simply by being who we are,” Rohr writes. It is what we longed for in our first half, but the containers of our lives were far too small and rigid.

“Your concern is not so much to have what you love anymore, but to love what you have – right now. This is a monumental change from the first half of life, so much so that is is almost the litmus test of whether you are in the second half of life at all.” The getting of stuff is competition, and competition is the vocabulary of the first half. Living lightly and being fully present is the grammar and syntax of the second.

In spite of my many words and too-quickly-voiced opinions, I have experienced periods of this bright sadness. It happens as I find solid ground on the fault line where joy and sorrow collide, It is not melancholy-tinged happiness; nor is it a folk-tinged emo song, accompanied by a single untuned ukelele. I have less capacity to work myself into a lather over what the president of Chick-fil-A said, or lament over the effects of presidential candidate Mitt Romney’s recent visit to Israel, or care like I once did about the wrong done by various church leaders, local or national. It’s not that I don’t care – I do, very much! – but I have less capacity to spill adrenaline in a fireworks show of (self-)righteous indignation. There is some part of my soul that is becoming a little less tethered to earth, I think, and the bright sadness reminds me that I really am made for another world.

What about you? Have you ever experienced a sense of bright sadness? Has it surprised you? In what way(s) has it affected you?