When there are generations of moral failures in our family, what hope is there for us?

It turns out, the shape of our our spiritual family tree looks dramatically different than that of our physical family tree.

An example: His great-great grandfather had blood on his hands. His great-grandfather started out strong, but the bloat of a supersized life of luxury left him morally compromised by the end of his life. His grandfather’s life was marked by war and division. His father was an idolater who died after only three years on the job.

With that kind of family history, there didn’t seem to be much hope for Asa, who became king of Judah, the southern kingdom of a divided nation. Yet Scripture tells us he’d gone in a radically different direction from his forebears (here and here).

Asa’s great-great grandfather David is simultaneously named by God as “a man whose heart beats to my heart, a man who will do what I tell him” and as the person who used his position to assault another man’s wife, then send that man to his death. Even so, God promised that the Messiah would come from the line of this complicated man. The next three generations of leaders that descended from David didn’t seem to have gotten that memo, as each generation’s disobedience muted the sound of God’s heartbeat.

By the time Asa was born, David had been dead for decades. Asa’s direct mentors were not faithful to God. If I lived in those days, I wouldn’t have had much hope for the direction of Asa’s life.

And yet, when he stepped into the role of King of Judah after his father’s short three-year reign, Asa showed himself to be a radical reformer. He expelled the male shrine prostitutes from the land. He got rid of the idols that had multiplied under the leadership of his father, grandfather, and great-grandfather. He removed his own grandmother from her cushy position as Queen Mother because of her addiction to idol worship. While he didn’t destroy entirely the high places in the land that had been devoted to idol worship, he turned the focus of the people back to worship of the one true God. Though battles with Judah’s cousin-neighbors in Israel to the north continued throughout Asa’s 42 year reign, the focus of Asa’s rule was in aligning his people with the words of life God gave to Moses hundreds of years earlier.

Scripture gives no clue if there was a catalytic incident in Asa’s life that caused him to  change the direction his family had been heading for generations and return to him. It simply tells us that he did. Just as his forefathers did, Asa hand-scribed a copy of the Law when he ascended the throne. But in his case, he received the words as a gift from the Author.

Whether it is Abram leaving his family to follow God into the unknown or Saul who was excelling at walking in his family’s spiritual footsteps until the risen Jesus apprehended him on the Damascus Road, Scripture emphasizes that every person in every new generation must decide to follow God for themselves. We receive an emotional and spiritual heritage through the family tree in which we’re placed, and those can be great gifts that point the next generations toward faithfulness and offer them the blessing of a solid moral foundation on which to build.

But they are not guarantees.

Nor are generations of lousy, abusive, addicted, or absent parents a guarantee of unfaithfulness in every subsequent generation. The parable of the prodigal sons highlights the fact that a good father may have children who wander in dramatically different ways from the childhood nurture they experienced. One child may choose an obvious sex, drugs, rock-n-roll rebellion; another may be a well-behaved but soulless legalist. In King Asa’s case, he chose reverse rebellion. His faith was his own. Itgrew despite being planted in some sour soil, fertilized by the sin of his forebears.

There is no genetic heredity for living faith. Faith is a ssed planted, direct gift from our heavenly Father, not our human parents. Even if we come from a family marked by many generations of living faith, the reality is that each new branch of that family is connected directly to the Root. Every believing parent learns at one point or another that we can not graft our children’s faith onto our own and cause their faith to grow. But Asa’s story reminds us that faith’s seed does not contain human DNA, but that of The Creator, Sower, and Harvester Himself – our God.

Faith does indeed take root in every generation – even when family history or even current inhospitable growing conditions seem to predict a different outcome.

Related! Coming in September – a great opportunity to think more deeply about our family stories: 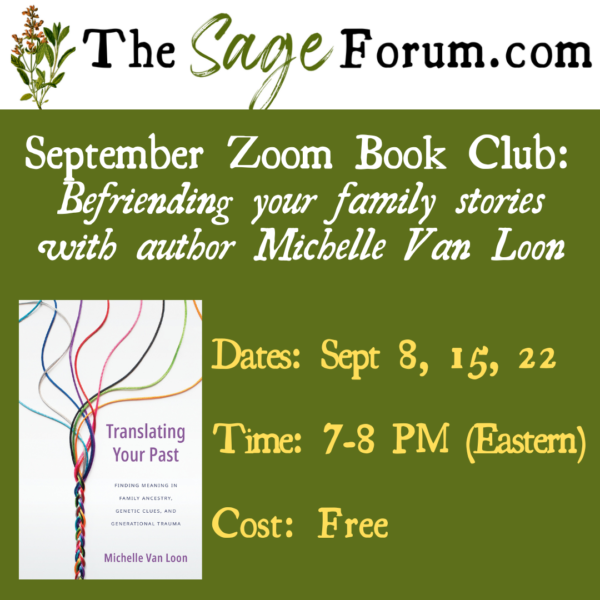 The very first Sage Forum Book Club is slated for September 8th, 15th, and 22nd at 7 PM Eastern time. I’ll be leading three interactive sessions via Zoom surrounding the content of my latest book. We’ll explore why our unique family history matters, take a look at the effect of trauma and challenge in our family’s past, and talk about the gift of legacy we are creating now with our lives. Purchase of the book is recommended, but not required, and there is no charge for this event. Click here before 5 PM on Thursday, September 8th to register.

One thought on “Faith is a seed, not a graft”