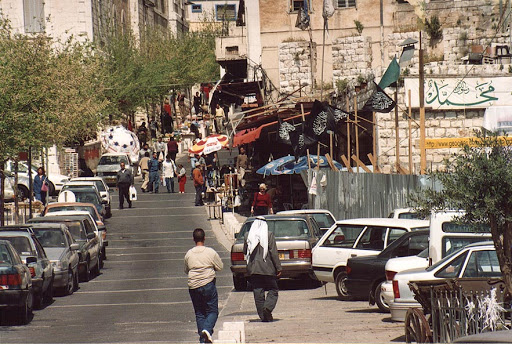 I sat on an empty bench on a busy city sidewalk while I waited to meet up with some friends, soaking up the midday sunshine and enjoying that delicious sense of invisibility that comes with people-watching. Everyone was on their phones, leaving a trail of bits of conversation in their wake, their purses and backpacks and shopping bags swinging in cadence with their steps.

Three young teen boys were jostling each other, teasing one another as they passed me. I noticed them first because none of them were on tethered to cell phones but were laughing and chatting with one another. I noticed them stop about a half block after they passed me, conferring about something, before one of them came running back in my direction. When he reached me, he stopped, cursed me, and then spit on me before running back to join his friends. The adults on their cell phones who witnessed the event avoided making eye contact with me as I wiped the boy’s angry spittle from my face and hair.

I was in the Arab-majority city of Nazareth in Israel. “Do you think he spit on you because he could tell you were an American?” someone asked me later.

While it’s possible, my soul knew that wasn’t the case. I am an Ashkenazi Jew, my features marking me as the loathed Other on that busy street. Though I didn’t understand the precise words the boy yelled at me, my heart heard animosity that stretched back through millennia to the fissure between half-brothers Isaac and Ishmael.

There are a lot of ways to spit on someone who is different than you. You can ignore them. Hassle them. Patronize them. Exclude them. Objectify them. Lie about them. Disempower them. Laugh at them. Redline them. Imprison them. Cancel them.

Maybe even kneel on their neck for 8 minutes and 46 seconds.

One thing that never fails to thrill me when I read the Gospels is watching how Jesus interacts with those excluded from social, religious, or political power – criminals, messed-up people, the chronically-ill, demon-imprisoned, the invisible. At the beginning of his ministry, he read the words of the prophet Isaiah in his local synagogue in Nazareth, and told the family members and neighbors who’d assembled that Shabbat morning as they had every week of his life that he came to fulfill that ancient promise:

The Spirit of the Lord the Eternal One is on Me.
Why? Because the Eternal designated Me
to be His representative to the poor, to preach good news to them.

During the next three years, he did just what he said he would. And he still is, through his imperfect, willing, forgiven followers.

I’ve dealt with the oldest form of racism, anti-Semitism, both in the church and in the world at large throughout my life. The experience has been a tutor that has trained me to be ready to speak truth to power when I’ve seen power abused in the church, and occasionally but not consistently, to take small, personal actions regarding political issues that concern me. The last few years – and especially, the last few weeks – have underscored that following Jesus means continuing to press into the discomfort of these times. I recognize that in many places in America, my white skin affords me some measure of protection as I go about my daily life – protection that is not afforded to those in my family’s circle who are Hispanic or Asian, and certainly not to those I know who are African-American.

But I’m not racist, I hear people say. The truth is that all of us carry some measure of discomfort with those who are strangers to us. We learn it at home, and have it underscored by socialization as we grow. (Think back to your own school days and what it was like to be left out or bullied. No one wants to be the outsider, left-out kid.) Collectively and over generations, some have spit their own bile on their fellow citizens and, and in many cases, fellow believers, because they are the Other. And those who aren’t doing the actual spitting are too often walking by and glancing away, perhaps swallowing their own spit as they move on to their next appointment. It’s time to stop swallowing, spit into our own hands, and then take a long, hard look at what’s there.

Between the pandemic, the economy, and racial unrest, there is little in our lives inviting us to comfort right now. What is the Holy Spirit saying to us in the midst of this discomfort?

O Lord, give us eyes to see, ears to hear, and hearts willing to obey.

All of us can follow Jesus into the discomfort of these times by taking a new first step, even if it makes us feel wobbly and uncertain: