I’m blogging through Richard Rohr’s Falling Upward: A Spirituality Through The Two Halves Of Life. Even if you haven’t read the book, please stick around and join the conversation here if you’re facing a mid-life transition. Father Rohr offers us all some meaty food for thought.

Click here to read the introduction to the series.

Chapter 4 is entitled “The Tragic Sense of Life”. With a title like that, you might imagine either sappy melodrama or torn-from-the-headlines horror. Father Rohr explores a less-episodic form of tragedy here.

“Life, as the biblical tradition makes clear, is both loss and renewal, death and resurrection, chaos and healing at the same time; life seems to be a collision of opposites.”

He insists that coming to terms with the chronic, yea, permanent nature of that collision of opposites is essential to our spiritual and emotional growth.

Even if we acknowledge that life post-fall is inherently tragic, we really don’t want that to be true. “Our mind, it seems, is more pleased with universals: never broken, always-applicable rules and patterns that allow us to predict and control things,” Rohr says. “This is good for science, but lousy for religion.” Yet rules and patterns are what most of us know when it comes to religion. We may think first of the hyper-fundamentalist folks who insist that the only true Christians are people who don’t drink alcohol, boycott Disney, and have an American flag on the platform of their church, but I have also known those on the other end of the spectrum who are just as rabidly fond of their church culture’s rules. Overzealous political correctness can be just as legalistic and idolatrous as lockstep insistence that the Eisenhower era was the benchmark for our lifestyles, politics and thinking.

To emphasize the point, Fr. Rohr notes that after 4 years of study, a professor said to him, “Well, after all is said and done, remember that church practice has been more influenced by Plato than by Jesus.”

Indeed, the quest to order, to organize and to systematize our human experience certainly has more to do with our own Platonic and/or Pharisaical impulses than it does with the Story of Scripture. “Much of organized religion…tends to be peopled by folks who have a mania for some ideal order, which is never true, so they are seldom happy or content…organized religion has not been known for its inclusiveness or for being very comfortable with diversity. Yet plurifomity, multiplicity, and diversity is the only world there is! It is rather amazing that we can miss, deny, or ignore what is in plain sight everywhere.”

In plain sight as well is our Redeemer, but we are blinded to his presence when we try to tell him how we can save ourselves with our carefully-crafted, controlled lives. “The genius of the biblical revelation is that it refuses to deny the dark side of things, but forgives failure and integrates falling to achieve its only promised wholeness…” This revelation is found in the person and work of Christ. In his great chesed (compassion), he welcomes us and our failed efforts. Rohr notes, “Salvation is sin turned on its head and used in our favor.” God did for us what we could not do for ourselves. 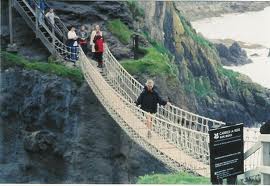 “Our mistakes are something to be pitied and healed much more than hated, denied, or perfectly avoided. I do not think you should get rid of your sin until you have learned what it has to teach you.” I don’t believe Rohr is advocating wallowing in sin here, but he is including a deep sense of teachability and humility as a component of true, lasting repentance. Otherwise, the lesson is wasted and we cling to an idealized version of the Christian life instead. “We could not love the imperfection within ourselves or the natural world, so how could we possibly build any bridges toward Jews, Muslim, people of color, women, sinners, or even other Christians?…We did not carry the cross, the tragic sense of life, but we became expert instead on imposing tragedies on others. Forgive my anger, but we must say it.”

To be honest, the bridge-building language here first triggers for me images of the kind of sentimental ecumenism that are typically used to drain the cross of its message in the name of kum-bay-yah. I’ve participated in a few formal interfaith bridge-building efforts over the years, and the ministry in Israel with which my husband and I are connected is involved with a reconciliation ministry called Bridge Builders! The bridge-building impulse may not work, no matter how well-intentioned it is. It is quite possible that at some point in my relationship with someone of a different faith, Jesus will become an offense and a sword.

However, I understand the point Rohr is making here. He is saying that if we camp on loathing our own sinfulness or the sinsickness of the world around us, and skip past productively dealing with it, our loathing will become a running chainsaw used to destroy relationships. History proves that one out, and most of us can detail our own experiences with the havoc created by that chainsaw. Hurt people hurt people, imposing tragedy on others.

Conversely, healed people are bearer of healing. They are capable of being bridge-builders, true bearers of Good News, because they are no longer using an idealized vision of the Christian life to hack themselves or the world around them into submission to that vision. Rohr says,

“The tragic sense of life…is the ultimate and humiliating realism, which for some reason demands a lot of forgiveness of almost everything. Faith is simply to trust the real, and to trust that God is found within in – even before we change it.”

Life is bitter-sweet. God is there in the tragedy of the bitter, and the delight of the sweet: a parable. And an invitation.

Where have you seen the battle played out between the idealized version of faith or life and the tragic reality? Which vision won the day?