I’m blogging through Richard Rohr’s Falling Upward: A Spirituality Through The Two Halves Of Life. Even if you haven’t read the book, please stick around and join the conversation here if you’re facing a mid-life transition. Father Rohr offers us all some meaty food for thought.

Click here to read the introduction to the series.

Chapter 3 is entitled “The First Half of Life”. Father Rohr begins by tossing out a couple of statements:

1. Healthily conservative people tend to grow up more naturally and more happily than those who receive only free-form, “build it yourself” worldviews.

2. Without law in some form, and without butting up against that law, we cannot move forward easily and naturally. The rebellions of two-year-olds and teenagers are in our hardwiring, and we have to have something hard and half good to rebel against.

“You need to struggle with the rules more than a bit before you throw them out,” he writes. “You only internalize values by butting up against internal values for a while. All of this builds the strong self that can positively obey Jesus – and ‘die to itself’. In fact, far too many (especially women and disadvantaged people) have lived very warped and defeated lives because they tried to give up a self that was not there yet.” 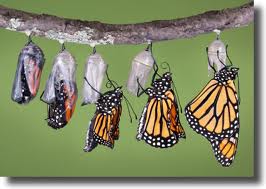 Rohr is saying that the struggle against rules and authoritarian structures is good for us. A butterfly can not fly if it is helped as it fights to emerge from its chryssalis. It needs the struggle to work out its “butterfly muscles” so it can fly. He asserts the lives lived by many women and the disadvantaged can be attributed to the fact that they’ve surrendered their lives to others before they seized the opportunity to fight for their lives.

I think of a few women I’ve known: “model” Christian women; pastel perfection wrapped around a core of unexpressed anger. They were known as exemplars, but let another woman cross them or get in their way, and the claws (and truth) would come out. Perhaps they were fighting for themselves at the only level they could fight from the confines of their cocoon.

“Basically, if you stay in the protected first half of life beyond its natural period, you become a well-disguised narcissist or an adult infant (who is also a narcissist!) – both of whom are often thought to be ‘good old boys’ (or my add – gals) by the mainstream culture,” Rohr writes. Our first-half-of-life container is built out of traditions, symbols, respect for authority, rules, regulations and the approval of our “tribe”. He suggests that it is easier to break free of the structure in the second half of our lives if the first half is constructed of conservative/traditional building materials.

“People who have never allowed themselves to fall are actually off balance, while not realizing it at all.”

On the other hand, the rules hold us and allow us to grow up, building discipline, promptness, persistence and a healthy self-image. But there are few who’ve experienced this in a healthy way. Containers made from the ideologies of “communism, fascism, terrorism, unfettered capitalism (yes, Wall Street is also am embodiment of our ideology!)” are poor substitutes for the kinds of containers created by healthy families, churches and communities. Rohr notes, “None of these ‘isms’ ever create a ‘civilization of love'”.

Our rapidly-changing post-modern world leaves many searching for the sanctuary of a container. “Men join a male club, like the church, to get the male energy they never got as sons, or because they accept the male game of ‘free enterprise’ and social advancement.” No wonder some of these leaders are so invested in control of their fiefdoms. “Many fall in love with their first place and position, as an extension of themselves, and spend their whole lives building a white picket fence around it.”

The final section of the chapter talked about discovering ‘authentic inner authority’. It takes a guide, a soul friend or a stumbling block to guide us beyond being a loyal first-half soldier. “You will have many more Aarons building you golden calves than Moseses leading you on any exodus.” Discharging our “loyal soldier” means that we will become soul drawn in the second half instead of the ego-drivenness that defines the first half of our lives.

Those who are in mid-life transition, I have a couple of questions for you: In what ways have you seen your relationship with rules change? Does Fr. Rohr’s explanation of the purpose and role of rules in the first half make sense to you? Why or why not?