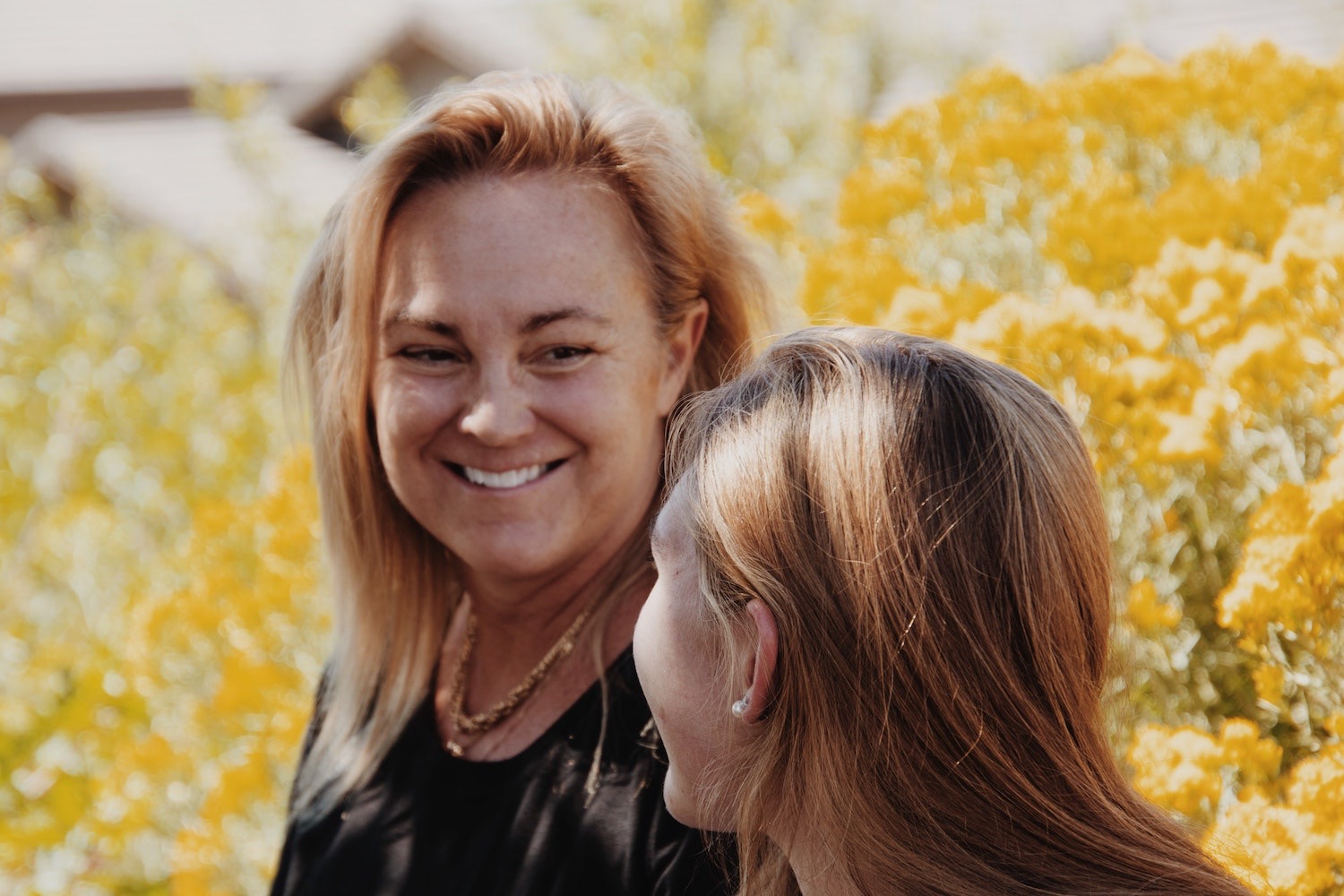 To my younger sisters in the faith:

Perhaps you grew up in the church, and have chosen with joyful intention to continue in the same tradition or denomination now that you’re an adult. Maybe you’ve deepened your faith commitment as you’ve moved into your twenties or thirties. Maybe you’ve made a big change in your life, and have found stability and community among other believers who seek to take the Bible seriously.

In a time when many of your peers are moving away from the church, I commend you for your countercultural decision. When I came to faith in Christ more than four decades ago, 68% of Americans maintained some kind of church membership. A recent Gallup poll reports that less than half of Americans now identify as church members. If you are sticking around, you are swimming against the tide. That takes strength and conviction.

There is a temptation in that place of strength and conviction. It’s subtle, and it masquerades as virtue or even victory. But it is a terrible lie, and it will, in broad daylight, steal pieces of your soul from you.

It is the myth of Biblical womanhood. If you’re in conservative church circles, and sometimes, even if you’re not, there is the idea that there is a certain way to be in the church as a Christian woman. Men are the spiritual leaders of the church. Women aren’t. Some call it complementarianism. Others call it patriarchy. Historian and author Beth Allison Barr, whose new book, The Making of Biblical Womanhood: How the Subjugation of Women Became Gospel Truth, describes how thoroughly this teaching saturates our subculture:

Men lead. Women follow. The Bible tells us so.

For a time, I believed this too. It echoed all around during my teenage and young adult years. I heard it attending a Bill Gothard conference, which some people in my small-town Southern Baptist church invited me to. I heard it from my Bible study leaders in college. I heard it from the hosts of Christian radio stations. I heard it from the notes in my study Bible. I heard it at almost every wedding ceremony I attended, spoken loud and clear as each preacher read Ephesians 5. Male headship was a familiar hum in the background of my life: women were called to support their husbands, and men were called to lead their wives. It was unequivocal truth ordained by the inerrant Word of God.

I’m not writing you to debate the Bible passages and translation choices at the center of this debate. Barr’s book, along with books like this and this, are great starting places if you want to further explore those questions and how they play out in your own church context. But I am writing you to tell you that the subculture in which you find yourself is shaping you not only by the words you hear in a sermon or from a Bible study leader, but also from casual comments, programming choices, attitudes, and lifestyle decisions of those in your Christian circle.

Even if the content wasn’t focused on teaching about gender roles and expectations, decisions like these in the churches my family attended created a web of unwritten rules that taught me who I was allowed to be within that particular subculture:

I spent years in conservative circles, because they claimed to be, if not the one true church, at least the most Biblically-faithful one. I valued my role as a wife and mother, and I wanted to honor Jesus with my life. There were gifts of being in this conservative world: I learned to love the Bible. I found purpose in taking seriously my relationship with Jesus. (I still do.) I found companionship with other mothers, some of whom have become lifelong friends.

But the boundaries lines in that world meant I had to dial down my leadership gifts and my desire to learn about theology and church history. I heard from men and women alike variations of “What are you reading that for?” if I mentioned a book or topic that wasn’t on the prescribed list for women. (It wasn’t an actual list, of course, but a grouping of blessed, discussed, and celebrated titles within women’s circles that included syrupy Christian books long on emotion and short on Biblical content or G-rated Christian novels that were sermons in the form of stories.) I was marginalized, branded as a problem, or dismissed entirely when I tried to move outside those rigid boundary lines.*

My own reading of Scripture led me to wonder over the years if my church leaders were really interrogating the questions of gender roles, or whether they were simply maintaining their own comfortable kingly status quo. It wasn’t Scripture that led me to support complementarianism, to be honest. My support was primarily pragmatic. I used to believe that if women led, men would abdicate involvement in the church. Though in the complementarian world, I was told that men were the protectors and women needed to be defended, underlying my belief was the idea that I needed to protect the men by playing my prescribed role. Meanwhile, I carried a great deal of shame about who I was as I absorbed every cue from my subculture telling me that the ideal Christian woman was submissive, quiet, soft, modest, and sweetly pretty – a damsel who needed rescuing by a dashing prince. I didn’t fit that mold. Though I am bright, I believed I needed to hide my lamp under a bushel so as not to intimidate the men at church.

Because I supported the complementarian system for the first half of my Christian life, I played a role in perpetuating it. I am sorry I did that, because I can tell you there are many older women like me who wish they would have embraced the freedom from complementarian role-playing – freedom God was offering them all along. You don’t need to wait for the crises of midlife to receive that freedom.

I understand these are different days, and that you might not feel the strictures of conservative Evangelical social boundaries in the same way women of my generation did. But I know the power of peer pressure, and I want to alert you to its effect on you. I want you to shine! I’m connected with many women from all over the country (and world), and hear younger women like you who are trying to figure out this stuff. You want to live the way your peers and mentors at church say is good and right. Maybe the complementarian formula is working for you. (Beth Allison Barr confessed to that very thing in her book.) If your husband is a moral and kind man, and your church leaders are not bullies, the formula may indeed work for you.

But I can tell you that it isn’t working for some of the women in your circles. Power imbalances in relationships are a fertile breeding ground for abuse. Your church can’t have true community if everyone knows they must play an assigned role…or else. Some have elevated complmenentarianism to a first-order dogma, as though it is a central tenet of the faith like the virgin birth or the resurrection. It is not, nor is a complementarian lens the only Biblically-faithful, wholly-orthodox way in which to read God’s Word.

I have spent the last couple of decades recovering what I traded away in a fruitless quest to find true community in those circles. The love offered to me there was conditional on me playing a role God never asked me to play, which is to say, it wasn’t really agape at all. I want more for you, my younger sister, and for your friends at church. I’m cheering you on as I pass the baton to you. The closing words of Beth Allison Barr’s book are my prayer for us all:

What if we finally stood together, united by our belief in Jesus instead of divided by arguments over power and authority?

What if we followed the example of Jesus, who let Mary of Bethany sit at his feet like a male disciple and who overruled his disciples to make sure he heard the words of the woman of Canaan? What if we realized that, even when the male disciples pushed women away, Jesus always listened to women speak? Complementarianism is partriarchy, and patriarchy is about power. Neither have ever been about Jesus.

I don’t remember when I started it, but for a long time now, I have been dismissing my students from class with this phrase: Go, be free!

Isn’t it time for evangelical Christians to do the same?

*Thanks be to God, my husband never bought that party line, and encouraged me to read, write, learn, and lead. “I didn’t marry one of those docile Christian women for a reason,” he told me.

6 thoughts on “The Unmaking of Our Biblical Womanhood”