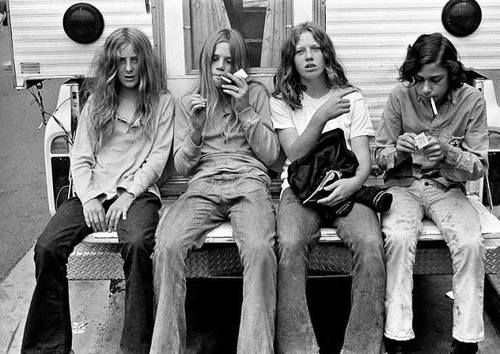 Boomers grew up hearing we shouldn’t trust anyone over 30. We were the generational revolutionaries living in the Age of Aquarius. We were gonna speak truth to power, fight The Man, and change the world.

That revolution ushered in change both positive (an end to the Vietnam War, incremental progress in the area of civil and women’s rights, the Jesus Movement) and negative (the shift in sexual mores, the roots of today’s incredible social and political polarization). And in the end, our self-focused generation morphed us from revolutionaries to consumers. We became known as the Me Generation, and the revolution was rebranded by the words of the fictional character Gordon Gecko in the 1987 film Wall Street: “Greed, for lack of a better word, is good.” Frankly, I don’t think greed was a 1980’s aberration to the purity of the 1960’s-70’s revolution, but the fruit that grew from the seed of post-war prosperity in our country. So much of that prosperity was poured into Boomers that our often-entitled, pampered generation expected we had it coming to us.

And all the generations that have come in our wake – Gen Xers, the Millennials, and now Gen Z – have had to deal with the culture created by Boomers. I don’t think Boomers as a group recognize what that is like. I think many of us still see our cultural identity as revolutionaries fighting The Man. On the other hand, our children and grandchildren recognize us as The Man. 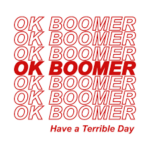 The New York Times and a number of other media outlets have reported on the clapback that has become a Gen Z shorthand for frustration with Baby Boomers. A recent New York Times piece discusses the OK Boomer phenomenon. In the piece, researcher Josh Citarella explains the financial roots of the frustration with those they believe are responsible: “Essentials are more expensive than ever before, we pay 50 percent of our income to rent, no one has health insurance…Previous generations have left Generation Z with the short end of the stick. You see this on both the left, right, up down and sideways.”

It is not just economic issues fueling the anger. It is the perception that Boomers are unresponsive to the social concerns of younger people. (In other words, the exact things that torqued off us Boomers when we were chanting “Make love, not war” in the late 1960’s.) Another Gen Z source in the article, Jonathan Williams, describes how he views Boomers: “You don’t like change, you don’t understand new things especially related to technology, you don’t understand equality…Being a boomer is just having that attitude, it can apply to whoever is bitter toward change.”

I have talked to some in my generation who appear tone deaf to the concerns of the next generations. The reasons include frustration with not yet getting what they believe life or our economy owes them, a nostalgic view of their own “good ol’ days”, anger or concern about cultural change, and the general narcissism embedded in our shared experience as Boomers. Some are quick to dismiss discussions of social, political, or spiritual issues as settled and non-negotiable, thus shutting off any possibility of listening, learning, or growing. The temptation we Boomers face at this point in our lives is believing that our youthful radical mindset and catalog of life experience will keep us not only relevant, but make us automatically wise. Instead, a significant number of those younger than us view us as fools, brushing us off with a shrug: OK Boomer.

Four or so centuries before the birth of Jesus, the prophet Malachi said, “Remember the law of my servant Moses, the decrees and laws I gave him at Horeb for all Israel. See, I will send the prophet Elijah to you before that great and dreadful day of the Lord comes. He will turn the hearts of the parents to their children, and the hearts of the children to their parents; or else I will come and strike the land with total destruction.” (4:4-6). This prophetic passage points to Messiah’s advent. But it also calls us who bear his name to remember not our own good ol’ days, but God’s ways. When we do, he will turn us toward the next generations in a substantive manner. It’s not about us, and it never has been. Real relevance and wisdom starts here.

2 thoughts on “Not OK Boomer”