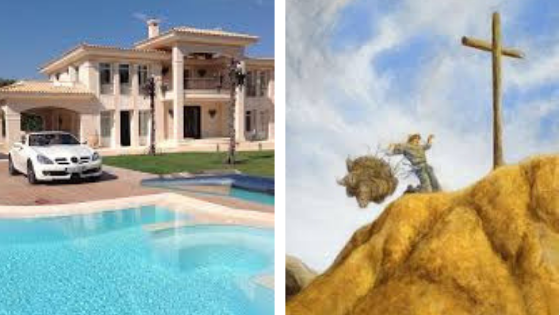 Prosperity preaching is not just for TV preachers. Prosperity-itis has infected us all. One vaccine against it might be found in a very old school source.

I appreciated this analysis from writer Brandon Peach, who explains that we’ve married American notions of the Good Life with the call to follow Jesus:

God wants to you be successful and happy.” Do you believe that?

Many of us do, or at least we accept it subconsciously.

Prosperity theology has found its way into modern evangelicalism, and it’s become a dangerous notion to contend with as we seek to know God more fully and experience Him in our personal lives.

The idea that obedience to God, at least in some vague way, results in health and wealth has been present in American Christianity since at least the 1800s. Widely known as the “prosperity gospel” this theological approach to Biblical teaching posits that God’s desire is to bless us with material blessings and a life free from illness and pain. While it has been thoroughly rejected by most mainline schools of Christian thought, prosperity theology is sneaky, having found its way into the worldview accepted by many denominations.

The pursuit of middle-class comfort is, if not uniquely American, woven into the fabric of the American Dream. As Christians, we often fall into the assumption or belief that God desires very much that we be comfortable, when throughout Scripture, this idea is challenged again and again. The “prosperity gospel” would have us believe that God wants us all to be wealthy, self-sufficient, cozy.

Its analog in the wider Church isn’t necessarily that God wants us to be rich, but perhaps a little bit richer. A little bit more successful. A little bit better off.

Christianity as a winning formula is underscored for us in dozens of ways designed to tap into our own aspirations. We cheer attractive Hollywood celebrities who dare to say Jesus-y things every so often while on media tour for their latest movie. We buy books by beachy-waved authors telling us to wash our faces and bootstrap our way to the life we deserve. We fill the stages of larger churches with youthful, talented performers singing the latest Tomlin or Bethel Top 40 almost-crossover hit. In countless conversations, we use words like #blessed to spiritualize our acquisition of new stuff, which not-so-subtly implies that those who can’t keep up with the Joneses might be #cursed. And some of us flinch at or ghost those who suffer, as if their condition is contagious.

As I wrote here*, 17th century preacher and writer John Bunyan would have been very, very surprised by the way in which we celebrate “winning” in the Church. Bunyan stood against moral compromise in every form, and became a lay preacher during the 1650s. He drew the ire of authorities who heard subversion in his holiness-themed messages, and he landed in prison in England in 1661. Magistrates told him he could go free if he’d lay off the preaching, but he refused. Instead, he remained steadfast in prison for the next twelve years. The prison was his desert. It was the place where he was transformed from cultural exile to spiritual pilgrim.

While incarcerated, he first penned his autobiography, Grace Abounding to the Chief of Sinners, which offers a compelling snapshot into John’s inner world—a world filled with intense battles with temptation, doubt, and his own pride. After the book’s publication in 1666, he used what he’d mined from his own soul to craft his masterwork, The Pilgrim’s Progress from This World, to That Which Is to Come, the allegory describing the believer’s journey through life.

The book has stood the test of time, though modern readers will find that Separatist preacher Bunyan occasionally takes aim in the text at a few of his religious opponents including Quakers, Catholics, and Anglicans. Even so, generations of readers have been inspired and challenged by his work. For many families, this book was the second one they’d add to their library after they purchased a family Bible. Pilgrim’s Progress has given the church the language to talk about the spiritual journey, It is a

While I haven’t yet seen the new animated version of Pilgrim’s Progress, which is scheduled to run in theaters on April 18th and 20th, I am encouraged that something of Bunyan’s alternate approach to “winning Christianity” will be out there in the public square, at least for a short while. If we treat the movie as another safe-for-the-whole-family consumer experience, we will miss the point. But if the movie drives us again into Bunyan’s message, that discipleship is a lifelong journey on a rugged, narrow road that will require us to die to ourselves, always fighting various temptations that attempt to hijack or sidetrack us, we may again find a narrative that more accurately reflects the way of Jesus than the Prosperity Gospel  ever will.

Even if you’re not planning to see the movie, I can commend to you a couple of versions of Bunyan’s story that are well worth your time if you are looking for a more accurate companion to help describe what it looks like to follow Jesus on that narrow road:

Hunkin, Oliver. Dangerous Journey: The Story of Pilgrim’s Progress. This volume is aimed at readers ages ten and up. The gorgeous illustrations make the familiar story come alive.

*I devote part of a chapter in Born to Wander: Recovering the Value of our Pilgrim Identity to Bunyan’s work. And I hope it doesn’t sound too self-serving to say that some of you may find this book’s exploration of the themes of exile and pilgrimage through Scripture make it a worthwhile companion to your reading of Pilgrim’s Progress.

3 thoughts on “A vaccine to innoculate against Prosperity-itis”