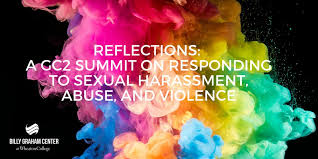 Yesterday, I attend the GC2 Summit at Wheaton College, hosted by the Billy Graham Center. The summit was designed to challenge church and organizational leaders to address sexual harassment, abuse, and violence in their midst. Speakers included some well-known names from the Christian community (Beth Moore, Max Lucado) as well as mix of others with expertise to add and stories to tell. Christianity Today offers a good summary of the event here.

A friend asked me to attend, and I decided to do so because of my own experience of spiritual abuse, years of confronting the sexual sins of leaders in some of the churches of which I’ve been a part, and the many treasured relationships I have with those in the survivor community. In addition, I’ve written about these topics as long as I’ve been blogging – now almost 13 years.

I went into yesterday’s summit with a couple of reservations. One of the organizers of the event, Ed Stetzer, has in the past been a supporter of a pastor who has covered up sin in his own camp and created a very toxic environment in his network of churches. And one of the speakers, Christine Caine, recently settled a lawsuit accusing her of plagiarism, and is connected with a pastor who is facing credible charges of coverup of a sexual sin in his church. For these and a variety of other reasons, some in the survivor community were unsupportive of yesterday’s event.

I also attended with great confidence that some of the speakers with whom I’m familiar would not pull any punches. Beth Moore has been a prophetic and powerful voice in recent years. Nancy Beach has been an integral part of the Willow Creek story of the last year. Belinda Bauman was one of those behind the #silenceisnotspiritual response to violence against women. I should note I’ve seen Ed Stetzer willing to speak truth to power, and I’ve appreciated his writing through the years, and hoped for the best from him and others at this event.

Disclaimer: While the Summit was happening yesterday, I was also getting text messages from a realtor in another state as we’re in the middle of maybe trying to buy a small condo. I say this only to note that I wasn’t always able to focus on each speaker. (Pro tip: real estate negotiations and conference attending aren’t a good combination.)

With that note, here are some observations about the day. I appreciated the intentionality behind the speakers and the way the day was organized. Bible teacher Lindsay Olesberg began the day with an exposition of one of the more searing passages in Scripture. Caine, Moore, and Eugene Cho spoke next. Because abuse survivors Caine and Moore found refuge and healing in the church, their stories were canted toward encouraging churches to recognize that they are called to be communities of healing. Eugene Cho (and others throughout the day) pressed leaders to get women’s voices and diverse voices at the table as an essential expression of what the body of Christ is meant to be. From my perspective, the glaring omission in the morning’s lineup was in the fact that there were no speakers who’d survived being abused by a church leader. Those voices are an essential part of this conversation, and it bothered me that none was represented.

Next, a panel of professionals tackled dealing with trauma, Wheaton Provost Margaret Diddams discussed workplace bullying and power dynamics, and preacher R. York Moore closed that section of the day with a message about finding healing in a healthy, full-orbed understanding of what it means to be created in the image of God. No complaints about this section of the day, save that it was just a bare introduction to what is a complex topic.

After lunch, Pentecostal preacher Jeanette Salguero discussed her own abuse and journey toward wholeness, and then we were given time and space to process what we’d heard to that point of the day via a time of silent prayer. Following that, some calls to action from Belinda Bauman (speaking out on issues of violence), protecting children (Kelly Rosati), and listening to the voices of Millennials and Gen Z’ers on these issues (Laurel Bunker). These issues should be what we’re known for as followers of Jesus, but the fact that we had to be reminded of these basics underscores how far many of our institutions have drifted from our mission. One person not present, but who belonged in this segment of the day’s speakers is Boz Tchividijan, whose organization, GRACE, does essential work in these areas with churches.

The final section of the day addressed power dynamics in churches. Ed Stetzer issued a call to leaders to humble themselves. Nancy Beach was frank and specific in her remarks asking those surrounding the inner circles of power to consider what they’re getting out of supporting a toxic leader. I had to leave before Max Lucado closed the event, but I learned he revealed his own #metoo story. I think the subject of power dynamics in churches could use about 3,692 summits. It is at the core of every kind of abuse, and only the wounded and disempowered tend to speak about it right now. (I’ll include myself in that number.) A speaker I heard about 30 years ago said, “You can either do it God’s way, or do it God’s way”. He meant we can either choose to surrender to Him, or be required to surrender in the end. Voluntary surrender is what a crucified life looks like, and for leaders, this means taking a good, hard look at the dynamics of power and what it does to their souls – and their followers.

I appreciated that the Billy Graham Center did not pay any of the speakers, and that any profits from the day were being donated to an organization that cares for survivors. I think the event was a worthwhile first step, even with what it lacked, and I’m glad I went. I pray that the people who came (particularly church staff groups) DO SOMETHING with what they heard, and don’t just check it off a list as a staff development day. I hope that Summit organizers will continue to press this issue for the sake of victims, survivors, perpetrators, and the sake of a Church who is called to be a pure, spotless Bride – and will be in the end.