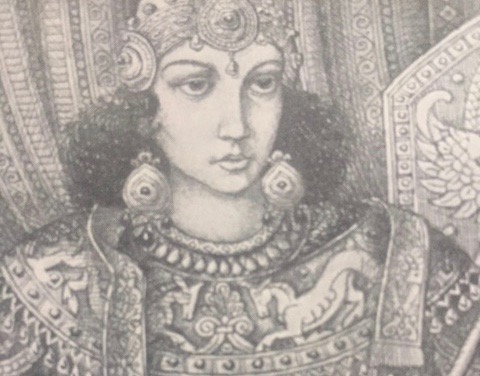 Who doesn’t love the story of brave Esther, the young Jewish woman who worked in concert with her insightful uncle Mordecai to save her people from holocaust in ancient Babylon? The book of Esther is an example for me of what it looks like when exile becomes pilgrimage. Esther’s people had lost their homes and been marched en masse into captivity by the conquering Babylonian army. This was the usual script in the Ancient Near East when a people were vanquished – all but the sick and weak were captured, marched into captivity, dispersed, and often forced into slavery in a culture not their own.

But instead of scattering people who’d been spiritual exiles while they were living in their own land as they’d wandered into idolatry and syncretism, Babylon served to regather the Jewish people into a single community marked by their resistance to fitting in to the majority culture around them. The book of Daniel profiles one form of this resistance. The book of Esther, another.

Esther (Hadassah in Hebrew) was likely born in Babylon, and had grown up with two equally-powerful realities shaping her life. The first was that she was a minority in someone else’s culture. The second, that she’d lost her parents at some point, and was being raised by her uncle. The book of Esther in the Bible opens with her story of being drafted into a harem, and being sent for an ancient version of spa treatments in preparation for her overnight “audition” with the Babylonian king. Scripture doesn’t record that she resisted any of this. As a captive minority, she did what most of her people did in order to survive: she kept her head down and didn’t rock the boat.

When Mordecai learned that one of the king’s top advisors, Haman, had launched a plot to slaughter all the Jews in Babylon, he went to his niece and called her to act. To this point in her life, her choices had been made for her. Now she was being called to make a choice:

When Esther’s words were reported to Mordecai, he sent back this answer: “Do not think that because you are in the king’s house you alone of all the Jews will escape. For if you remain silent at this time, relief and deliverance for the Jews will arise from another place, but you and your father’s family will perish. And who knows but that you have come to your royal position for such a time as this?”

Then Esther sent this reply to Mordecai: “Go, gather together all the Jews who are in Susa, and fast for me. Do not eat or drink for three days, night or day. I and my attendants will fast as you do. When this is done, I will go to the king, even though it is against the law. And if I perish, I perish.” (Esther 4:12-15)

You can read the rest of the story here. On the Jewish calendar, the one-day festival dedicated to remembering this story is called Purim, and takes place this year beginning at sundown on February 28th. Here’s how the observant Jewish community celebrates this story each year. (Below you’ll find a link to a piece I wrote a few years ago showing churches how they might adapt this celebration to their own context.) Contemporary Purim celebrations are often focused on fun, storytelling, hamentaschen, and a splash of debauchery in some circles – a variation of the motto of many Jewish holidays, which is “They tried to kill us, we survived, let’s eat”.

I like hamentaschen as much as the next person (especially the poppy seed-filled kind), but as a believer in Jesus, this year my heart is turned again to that moment where Esther went from being a passive participant in someone else’s story to making a choice. This year, in light of the #metoo and #churchtoo movements, I have been en-couraged (dash intended) by the actions of brave women, along with a few men who have stepped forward to speak truth to power. Rachael Denhollander’s courageous, informed advocacy in both courtroom and church has been for me a modern model of what it is to walk in Esther’s footsteps here and now.

Though I have for years written about church dysfunction and spiritual abuse, in recent months, I’ve found new courage to raise my voice in a few key real life, real time exchanges with leaders who are acting in their own self-interest by either neglecting or flogging the sheep in their care. It is not easy to look someone bearing a title of authority in the eye and tell them their actions are causing harm to you and others. But at this point of my life, remaining silent is no longer an option. I’ve come to understand my silence is nothing more than a recipe for creating future #churchtoo stories. It is likely I will never be called “sweet”, “winsome”, “compliant”, or “supportive” by at least a couple of leaders I’ve confronted. Ah well. That is a very small price to pay. Esther’s words (“If I perish, I perish”) may sound to some like fatalism, but to me they are what courage sounds like.

For more about the Jewish feasts, the Christian calendar, and all the days in between, visit www.MomentsAndDays.org.