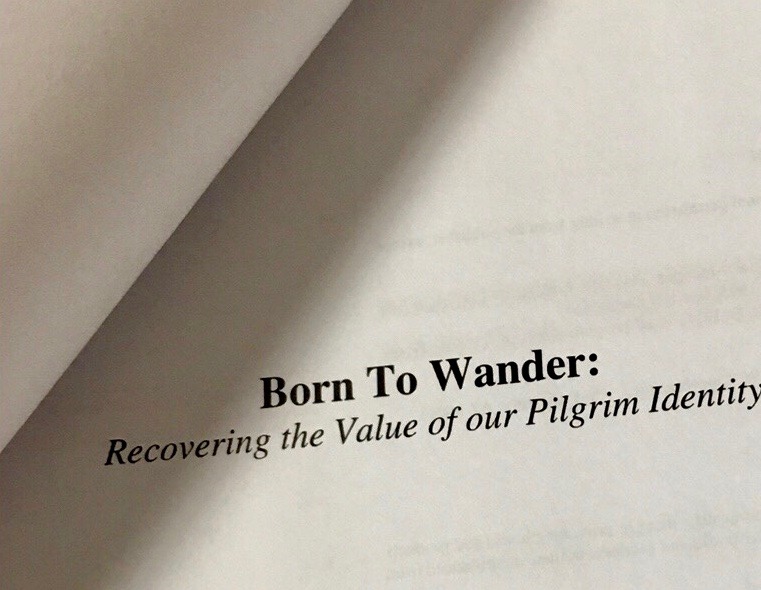 Just over a year ago, I had the honor of speaking at the Deeply Rooted event in Chicago. I talked about pilgrimage and exile, subjects in which I’d immersed myself for months, and lived for much, much longer.

After I speak, there are often a few people who wish to talk. One woman, Amanda Cleary Eastep, made a point of finding me to tell me how much my message meant to her.

I had no idea that this brief conversation would be the beginning of some pretty incredible collaboration. A few weeks later, Amanda commented on a post I’d written for Scot McKnight’s Jesus Creed blog. I can’t find the context of the comment now, but it had something to do with midlife spiritual growth. That comment launched a few swapped emails, then a bunch more, then a meet-up as we begin talking about putting together a blog or website that would allow us to amplify the voices of other midlife writers, and tackle topics not often addressed in a way that would reflect the diverse, smart, curious, faithful, experienced women and men we knew were out there.

We wrangled over names for our site. We tried and discarded gems like “Halfway There” and “Orange Bellbottoms” (my personal favorite, but no one beside Amanda and I seemed to like it!) We brainstormed together via Google doc, Facebook messenger, email, and text message. We bought a domain: ThePerennialGen.com. With the help of a friend, Amanda wrangled tech and gave the site “our” look. We drafted designer and brilliant thinker Ruthie Johnson to develop our logo. We launched the site as April became May of this year.

In the middle of all of this, my dream to write a book about exile and pilgrimage became a reality, as I received a contract for the project from Moody Publishers. I was in the midst of drafting chapters through the early months of the summer, when Amanda told me she was interviewing for an editorial job at this very publishing house. She prayed for me as I wrote, and I prayed for her as she went through the interview process. I was tickled when she got the job, because I already knew she was a thorough, creative, and insightful thinker.

I was stunned when me a message a few weeks ago to tell me that she’d been assigned my manuscript to edit. Born To Wander: Recovering the Value of our Pilgrim Identity. The pic below contains on the left a note she wrote the day she heard me speak about pilgrimage and exile (“Michelle from CT” references the freelance writing work I’ve done for Christianity Today magazine), and on the right, the manuscript she is now editing. 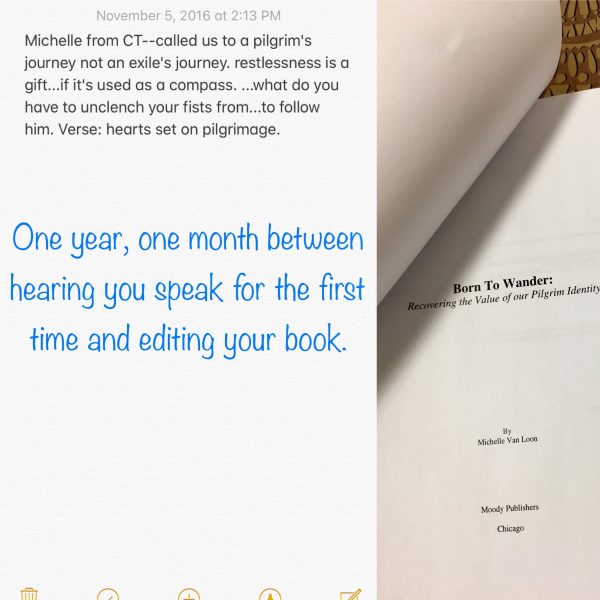 How cool is this?

I had no idea when Amanda introduced herself to me a year ago how our lives intersect and overlap. We continue to dream big dreams for ThePerennialGen.com. And I am deeply humbled by the way in which God has gone before me, bringing Amanda to her role at Moody, as this book makes its way into the hands of its readers.

There’s no way I could have orchestrated any of this. No possibility I could have imagined it. There is a rhythm and purpose woven by God through the jaggedness of our world. Sometimes, we get an unfiltered glimpse of him at work in that warp and woof. I can see him in this still-unfolding story. Paul’s words to his friends at Philippi are my prayer for my new friend-become co-conspirator-now editor, Amanda:

I thank my God every time I remember you. In all my prayers for all of you, I always pray with joy because of your partnership in the gospel from the first day until now, being confident of this, that he who began a good work in you will carry it on to completion until the day of Christ Jesus. (Philippians 1:3-5)

Have you developed a new friendship in the last year or two? What has surprised you most about it?