In yesterday’s post (click here), I introduced Don and Kathy Groesser, a couple with three young children with whom we worshipped two decades ago. A lot has happened in our respective lives since then. In the case of the Groessers, they became a family of 14. Their convictions about allowing God to plan their family led them to the margins of the Evangelical world as they connected with the homeschooling/large family subculture.

Once they arrived at those borderlands, their faith journey took them beyond the margins. I share their words in order to help us listen to those who have responded to God in out-of-the-ordinary ways.

Here’s the second part of my Q and A with Don:

Q: When you were planted in the Evangelical world, how did people react to your ever-growing family?

We could honestly write a book about how mean Christians can be when it comes to large families. They think it’s funny to say things like “Don’t you know what causes that?” or “You guys need to buy a television”. Some of them don’t know they are being hurtful, but I think many actually are reacting out of their denial that there is something unmistakably beautiful about cooperating with God in the creation of a new human soul … and that they decided to no longer cooperate with Him in this area of their lives. The jokes eventually become ridicule, and there were countless times when we would literally cry because we felt so alone among people who claimed to be our church family. We expected ignorant people in public to make stupid jokes about our big family, but in a church that claimed to be pro-life, it was really painful.

Once, one of our pastors asked us, “Do you think contraception is a sin”?

My coy answer was, “Well, like anything, if it’s done for the wrong reasons, it can be a sin”.

His reply: “That is an aberrant belief”. I was devastated by this comment and it echoed in my head for years. Over the last few years of being at that church, we totally began to withdraw and become more isolated.

Then after 25 years of being in the “Evangelical world”, God brought about several circumstances and relationships that cause me to reconsider the Catholic faith. I had been raised Catholic, as had Kathy. At one point, I recognized that the Catholic Church remained steadfast throughout her history of being fully pro-life, including in her rejection of artificial contraception. I thought, “If they are right about that, what else might they be right about?” That lead me on a five year theological and spiritual journey, which Kathy eventually joined.

Three years ago, we were sacramentally married in the Catholic church, and brought our eight younger children with us. Having a large family really isn’t the reason we became Catholic, although we now joke that we got tired of people accusing us of being Catholic, so we just gave in! In the three years since, neither of us have receive one negative comment from anyone in our parish or any other parish we visit! I’m sure there are some contracepting women who roll their eyes when we aren’t looking, but the fact that we are undeniably supported by the teaching of the Church gives us some credence we never had as a large family in an Evangelical church. 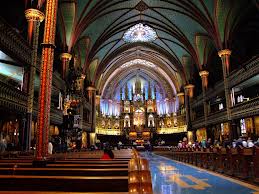 However, we did have some serious concerns with how our large family would survive the transition to the Catholic church. Although we were round-pegs in square-holes at our old church, we were leaving behind all of our friends, and the only friends our children ever really knew. The Catholic Church we remembered was not big on fellowship, so it was definitely a leap of faith for us. Yet in God’s continued faithfulness, two weeks after “coming home”, I did a google search for “Catholic Home Schoolers” and found a group meeting in a home just a couple of blocks away from us!

We joined them and discovered a group of Catholics that were intensely following Christ and faithful to the teachings of the Church, including contraception. Since that time, we have continued involvement in that group, Mission Community Center for Sacramental Growth. I became the Vice President of this lay apostulate that has grown out of that home group into a 501(c)3 charitable organization whose mission is to provide support to Catholic and non-Catholic Christians to raise their families in a way that promotes Christ’s grace in living a sacramental life. MCCSG, and the encouragement from our dear friends in it, has really helped us to mature in our understanding of being pro-life, helped us to re-think some of our misconceptions about raising a large family, and has helped us raise them more successfully.

Q: How has parenting a large family shaped you?

I would like to think I am a more patient person because I am a father of 12.

In reality though, I recognize that much of my parenting experience has been pretty self-centered. The truth is that I love having a lot of children because they are fun and keep life interesting. But I am just learning to focus on being a good father solely for their benefit, not for any “perfect big-family” image.

I used to think what was required to be a good dad was just trusting Jesus that everything would work out okay, kind of in spite of myself. That was really reflected in my spiritual life, too. Now I am starting to learn the difference between Hope and Wishful Thinking. Some fathers learn this lesson quickly. It has taken me 24 years. My spiritual life, and my family life, requires me to prepare and be intentional about getting to Heaven, growing in holiness, letting love be a verb instead of a noun.

For instance, I wish I had been more intentional in how I prepared my older children to succeed in life, but that perhaps has little to do with having a large family. It has to do with my lack of maturity. Instead, I think I did them a disservice by raising them with a counter-cultural mentality without strong allegiance for an alternative. We are trying to do things differently, and our 16 year-old son is seriously considering a calling to the priesthood. We are already forming the plan on how to get from here to there. We have eight other children to continue improving our skills in this area.

A big thanks to Don and Kathy for sharing a bit of their story!

And one more Q. to you, my readers: Have you or someone you know chosen to return to the church of your childhood after spending time in Evangelicalism? What precipitated that decision?