Over the years, I’ve written about some of the odd or unhealthy trends I’ve witnessed in Evangelicalism. I’ve annoyed a few people along the way, but have also learned that there are a lot more people who want to ask questions and share their own experiences. They may not always comment publicly, but I get emails and messages that tell me that I am not the only one with questions about the emperor’s clothier.

I can’t not ask those questions. (Yes, I intended that double negative.) The questions help me sift what is of eternal value from flea market knock-offs hawked as though they’re the genuine article by the emperor’s clothier.

So what does the real thing look like? I’ve learned that that the best place to look for answers – honest-to-goodness living, breathing, imperfect, forgiven people trying to walk in the way of Jesus is at the margins. No surprise there. That’s where he found his first followers.

From time to time, I’d like to introduce you to people I’ve known who’ve followed Jesus out to the margins. You and I may not sign off on each conviction these friends of mine share, but I hope their stories will spur you to ask a few questions of your own.

First up in this occasional series are Don and Kathy Groesser. We attended an independent Charismatic church with the Groessers more than 20 years ago. We left the church, moved to WI and lost contact with them, but thanks to good ol’ Facebook, Don and I re-friended. I was interested to learn that he and his family had left our old church after a couple of decades of membership in order to head in a direction that surprised many who knew the family.

When we worshipped with the Groessers, they had three young children, just like we did. They are now parents of twelve, ranging in age from 24 years through five months. Jen Pollock Michel’s “Thou Shalt Have More Children” post at Christianity Today’s Her.meneutics blog sparked a bit of conversation between Don and I, and led me to ask him if he and Kathy would be willing to submit to a bit of Q and A about their counter-cultural faith and family. The couple* graciously agreed.

Q: When you married, what were your convictions and hopes about family size?

Don: I was raised with just one brother. I really had no “convictions” about family size, I just assumed we would choose how many children we would have, just like people choose what they want to eat for dinner. I think the most children I could imagine having was three. We were married when I was just 21, and I wanted to finish having children when we were young, so that by the time they left home, we would still be young enough to enjoy being empty-nesters.

Kathy: I was the youngest of three girls. My dad told me they decided to have three, because if you had an odd number of children they wouldn’t fight (he was very wrong). I planned on having just a few children and putting an end to our fertility by the time Don was 32. I really didn’t think about any “convictions” about family size, to be perfectly honest.

Q. Were you always a “as many as God sends us” couple, or did this change? How?

Don: We really didn’t plan our first five children. It wasn’t that we were careless, it’s just that we were casual…ha ha! For us, going from one to two children was the hardest! Going from three to five was actually pretty easy. However, when our fifth child was born, I was seriously thinking the prudent thing to do would be to stop at five…but Kathy had a friend of hers who  shared with her the many scriptures that talk about how children are intended as a blessing from God, not a burden. I was hesitant, and considered artificial contraception no different than any other kind of medical intervention. 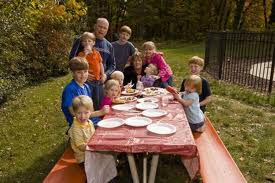 Then Kathy told me these words: “pregnancy is not an illness”. That stunned me. After that I decided to study the scriptures for myself and came to believe that being “open to life” was an act of faith. I didn’t want to say no to God’s blessing.

Q: In the early years, what scared you most about allowing God to plan your family size?

Don: The scariest thing was telling our parents we were pregnant AGAIN. I think most people assumed we were having more children because we were careless and didn’t consider the quality of life we would be able to provide for a large family. We learned to ignore “most people” but we still desired approval from our parents. They were pretty good with respecting our continued “fruitfulness”, although we can’t go so far to say they condoned it…but they eventually came to expect the semi-annual announcement that we were expecting.

Q: Who encouraged you during those years?

Don: There were a couple of other large families in our church, but one was much older than us, and the other didn’t home school, so although we were friends, we oddly didn’t really connect on the whole “big family” topic. Otherwise, we really didn’t get much encouragement from our church. We were an oddity, although in retrospect, I understand some of that. Most of our encouragement was through Kathy’s involvement in an internet group called MOMYS (Mothers Of Many Young Siblings). This group had about 6,000 members all over the country, and we actually took two vacations to Colonial Williamsburg with that group.

Kathy also subscribed to a magazine called Above Rubies recommended by her friend, and they held annual family retreats all over the country, and one which we attended each year in Fontana, Wisconsin. Kathy eventually became quite good friends with the publisher of the magazine, Nancy Campbell.

In Part 2 of this post, the pair will share the unexpected spiritual direction their lives took as they moved into the world of large families.

*Join me in wishing the Groessers a very happy 25th anniversary (March 5)!