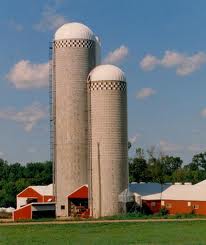 Though the suburban Chicago landscape is cluttered with far more strip malls than silos, it was the image of those tall, self-contained round storage units that seemed the best image to describe the problem. Get out of the city, drive through this region’s farmland, and you’ll see one or two silos marking most every agricultural property. Each self-contained silo holds similar contents, but none have any visual connection with the others around them.

The Evangelical churches in our area were like those silos. Congregations warehoused inside their own buildings, bunkered inside the four walls of their square silos. After we moved back to IL in 2004, Bill and I got involved in a regional prayer ministry. Through that ministry, we met others who were not satisfied with encouraging churches to simply build bigger silos, but instead cared about cultivating relationships between believers in those silos. I volunteered to begin communicating prayer answers, needs and events between congregational prayer champions. I connected with a woman who’d been involved in organizing quarterly concerts of prayer for our area, and with a fledgling organization called Catalyst Lake County. Catalyst Lake County (no relationship to the conference organization) was launched as a result of conversations a local mega-church pastor began having with a few other local pastors as they began asking together “What can we accomplish together that we can’t do alone?”

From 2006 onward, I had the privilege of being involved in helping to shape communications strategy for this organization – documenting stories of God at work (I wrote probably close to 200 of these accounts), and working with others to develop an e-newsletter designed to share those stories, along with information, inspiration and event listings that went out to a mailing list with 3,000-plus names on it. It was extremely gratifying to see the way that regular communication facilitated connection. And those involved with Catalyst Lake County, which would eventually become Christ Together Chicago, watched as connection of all kinds began to “de-silo” the churches. Catalyst Lake County brought Pastor Bill Yaccino to this area 6 years ago to nurture these connections, serve church and faith-based not-for-profits, and cheerlead the Church while encouraging her to think in terms of kingdom instead of silo. Kingdom thinking led to relationships being built and, in some cases, repaired between pastors serving the same geographic areas. food drives, shared building projects, urban gardens, backpack drives, prayer gatherings, and county=wide learning/worship/networking events (like this, this, this, this, and this). From this groundwork, 10 pastors in one town took things in a new direction as they launched the Go! Project, where small groups comprised of members from many churches living in the same neighborhood were formed in order to reach out to their not-yet-believing neighbors.

Local leaders hope to facilitate the Go! Project model among pastoral networks across Chicagoland. And the organizational guy involved in starting Catalyst Lake County nearly 10 years ago has connected with others involved in trying to spur city transformation across the country.

Christ Together Chicago in its current form is no more. It has been an honor to serve, first as a volunteer, then for the last 3 years as a contracted Communications Director. I’ll miss the relationships, and I’ll certainly miss the work, but I think the thing I’ll miss the most is seeing people come out of their silos and connect in new ways with the Lord and one another. I am changed because I have had a front-row seat that’s allowed me to catch glimpses of what the answer to this prayer of Jesus might look like:

I pray also for those who will believe in me through their message, hat all of them may be one, Father, just as you are in me and I am in you. May they also be in us so that the world may believe that you have sent me. I have given them the glory that you gave me, that they may be one as we are one—I in them and you in me—so that they may be brought to complete unity. Then the world will know that you sent me and have loved them even as you have loved me. –John 17:20-23

My experience during the last six years has ruined me for life back inside the silo. That kind of ruin is another glimpse of the answer to the prayer of Jesus. As the mission goes forward in new formats and with new leadership, I am praying that many others – both inside and outside the church, glimpse how very lovely, how very John 17, life outside the silo can be.