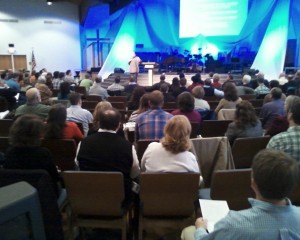 On Thursday, November 3, about 350 leaders from northern Chicago churches and non-profits gathered for the 6th annual Christ Together Forum. The shot above was taken during the main session.

Well, that’s what we all call the time when we sit together in a big auditorium and pray, sing, hear some keynote messages and learn about some of the things the big “C” Church is doing in Lake County such as educating kids in underserved schools, feeding families, reaching out to their neighborhoods in creative and prayerful ways.

But those of us who work behind the scenes to pull together these “gathering” events for the local church have come to believe that the real main session doesn’t happen in an auditorium. It happens in the lobby before and after, and during breaks. People connect or reconnect in very profound ways. I had lots of great conversations in that lobby, including a great catch-up with a guy I hadn’t seen since I was 20 years old. Another guy I knew from my Trinity Bookstore days is now on staff at a local church, and he told me that he saw a man who’d mentored him when he was in middle school and was able to thank the man for his influence in his life. “It’s because of him that I do what I do today,” he said, a wow in his voice. These sorts of scenes were repeated all day long, dozens and dozens of times. Ministry partnerships incubated in that lobby, friendships were renewed and many reported that they experienced a palpable sense of kingdom joy at being together with so many other local believers for a day of inspiration and motivation.

This was answered prayer! In advance of these events, we have taken to praying specifically for those lobby conversations, and asked the Spirit to move among the people as they drink coffee and schmooze to the glory of God.

I have never been a part of a local church that prays regularly for the lobby conversations (also known as “Fellowship 101”) on Sunday mornings. I wonder how different things might be in some congregations and at some gatherings if we did pray for God to work in those spaces?