I’ve had fairly limited internet access this week as we’ve been traveling. It became an unplanned digital Shabbat, intermittently punctuated with internet access that left me feeling a little like I was standing in front of a wide-open information firehose, which, in effect, I was. I’ve learned to modulate my response to the usual urgent (work-related emails), but I don’t always have a good working filter for other types of urgent. When I read about injustice and tragedy, my adrenaline kicks in. I must fight! Justice now! Many of the voices I read online are fighting the good fight in all sorts of redemptive ways.

Those voices often stir me to break out the rebel yell and run headlong into the battle in order to do Something Big about addiction/abuse/ignorance/human trafficking/the upcoming election/the Middle East/(well, you get the idea). I am drawn to the contemplative, but am enough of a first-born alpha extrovert that activism is my first response. Rarely do I get to use that adrenaline in the moment in which it is released like a pack of baying hounds. It disperses like a sour fog, every hound crawling back under the porch where he or she will sleep off yet another false alarm.

My inability to do Something Big usually leaves me with a vague sense of shame and failure. I crawl back under the porch, metaphorically-speaking, with the pooches. Why didn’t I do something? Anything? Anyway, what can I do? Bueller? Bueller?

Mother Theresa once famously noted, “In this life we can do no great things. Author Margot Starbuck, has a book on my ‘To Read’ list titled from this quote, coaching readers on what a small-things/great-love lifestyle might look like.) 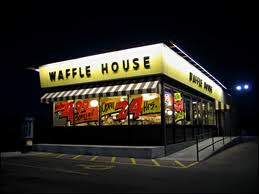 Yesterday, at a Waffle House near Asheville, NC, I had a front-row seat to one such small thing. It was a single domino, tipping other dominoes, a pay-it-forward moment of grace. It didn’t fight female genital mutilation or plant a garden in an urban food desert, but I have a feeling that it shifted the days of at least six people in an undeniably heaven-invades-earth kind of way. I happened to be standing near the register when a man who was paying his bill gestured for the cashier to lean forward toward him. I tilted my body toward the conversation like…well, a hound. The man gestured toward a couple in the crowded restaurant eating their breakfast.

“How much is their bill?”

Another server brought the check to the register, and the man paid it. “Don’t tell them the bill is paid until after I leave, OK?” Money changed hands, and he ducked out of the door quickly.

I stared out at the highway, contributing an Oscar-worthy performance of ignorance to what was transpiring a few feet away from me in the noisy restaurant. It was a holy ground moment, one I wasn’t meant to witness, one I desperately needed to see.

And one I can replicate. Something small, intended to be as invisible as the Kingdom and as beautiful as the King.

Be careful not to practice your righteousness in front of others to be seen by them. If you do, you will have no reward from your Father in heaven. So when you give to the needy, do not announce it with trumpets, as the hypocrites do in the synagogues and on the streets, to be honored by others. Truly I tell you, they have received their reward in full. But when you give to the needy, do not let your left hand know what your right hand is doing, so that your giving may be in secret. Then your Father, who sees what is done in secret, will reward you. – Matthew 6:1-4

What about you? Do you ever feel overwhelmed by your good desire to do Something Big? How do you handle it when you’re not able to respond in a big way?