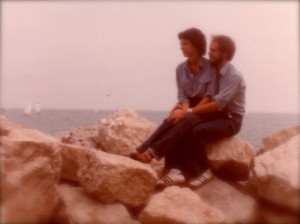 Weeks before our October 7, 1979 wedding, Bill and I headed with our wedding photographer to the site of our first official date about a year or so earlier. Most photographers weren’t doing engagement pictures beyond a simple portrait of the couple, but the friend who shot our wedding suggested we do a few casual shots before the wedding day.

This particular picture has been on my mind recently. Engagement photo shoots today are much more documentary in nature, much more personal. Stilted shots like the one above feel a little generic and predictable. Yet, there is something about this picture that captures who we were at that time. I’d just turned 20. I was a college drop-out who’d gone through 6 jobs in the previous 12 months in hopes of coming up some direction in my life. Bill, 24, had been working third shift as a check sorter operator and was hoping to make the leap to a first shift data processing job running stacks of punch cards through behemoth computers filling icy-cold rooms. (An aside: He noted that his cellphone has more computing power that a whole roomful of computers did in 1979.)

All we could do in 1979 was look forward, the calm waters of Lake Michigan disappearing into a blue horizon – an apt metaphor for our future. We didn’t know what that future would hold for us. We just knew we wanted to go there together.

Thirty-three years later, we still do.