I spent an extended time this morning studying  James 1, the result of signing up for my first-ever Beth Moore Bible study. Her biggish hair and cheerleader intensity had always freaked me out a little bit -by “a little bit”, I mean “a lot” – but since I’m a new girl in a new town, I took a big breath and dove in, joining a well-established study group for “Mercy Triumphs“.

One lesson might be “Don’t judge a perky cheerleader by her cover”. I’ve been pleasantly surprised and unpleasantly (in a healing way) confronted with the truths of one of my favorite New Testament epistles. This morning’s study brought to mind part of an extended meditation I included here a few years ago about one of my all-time favorite parables, the story of the religious superstar and religious flop found in Matthew 18:9-14.

Maybe you know a religious performer or three in your life. And maybe you kind of wonder if you’re a failure in God’s sight in comparison to them. 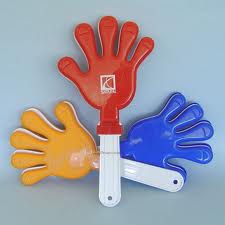 There’s Oscar and Emmy and Tony and their renegade cousin Razzie, along with myriad other prizes for best stage or screen performance in a given year.  The way many of us perform religion, you might be tempted to believe that there was a prize for “Superstar Christian Of The Month”, maybe a statuette of some golden praying hands that look suspiciously like clapping hands.  We can call it the “Handy”.

Any of those characters would be thrilled to get their own “Handy”.  They’d give an appropriately humble-ish acceptance speech, while believing that they not only earned their “Handy”, they deserved it.

These characters are sad-funny because we know them. Perhaps we’ve been suffocated by the ridiculous smallness of the Church Lady’s soul.  We’ve done an eye roll at Ned’s weird pronouncements about sin and righteousness while cheering Homer’s sarcastic responses.  We cringe knowingly at Hilary Faye’s gossipy prayer meetings and mean girl antics.

Each of the activities in which these people engage can have eternal value:  memorizing bible verses, pursuing spiritually vibrant life, worshiping God, creating and participating in activities that help others grow in their faith. But when these things are done for the applause of an audience, they’re sapped of all value except for the sound of the clapping hands or fleeting compliment.

That audience is a tough crowd. Think unsmiling Olympic judges, bent on hunting for flaws in the performance. And the applause is no louder than the polite approval you hear from the crowd at a golf tournament, if they even applaud at all.

The sad thing is that religious performers paste God’s name onto the faces of the audience and say they’re doing their show for Him. This sham was shattered at Calvary. There isn’t a one of us who can ever perform well enough for the one true God.  He gave His children the Old Testament Law to show us what his character is like, and to help them know how they could be connected to Him in unbroken relationship.  In turn, they spent generations either mostly not doing what He asked, or in turning the whole thing into a show.

He never wanted either of those things from them…or from any of us.  He simply wanted our hearts, fully engaged toward Him.  In His love, He embraced the rebels, and He offered performers a way to step off the stage.  Jesus told the story of the religious superstar and the religious flop precisely because He values our genuine, risky brokenness, not our bland, safe production values.

In the first century, there was a Christian community in a place called Laodicea (located in modern Turkey).  This church had become bland and stagnant.  John, Jesus’ beloved friend, experiences a supernatural interruption in the form of a series of visions at the end of his life.  One slice of this vision includes the risen Christ speaking to the angel responsible for caring for the Laodicean church. Though this body had likely embraced comfort and security, ceasing to care about everyone except themselves in the process, there is a phrase in verse 17 that is at the the cure for religious performance. Jesus says, simply:  “I…do not need a thing.”

The religious professional in Jesus’ story in Luke 18 did not need a thing.  He was so full of the wealth of his good deeds and clean living that all he could do was live on stage, listening for the applause of men.   Like the Hans Christian Andersen’s fairy tale emperor who paraded before his subjects in the buff, convinced he was wearing a beautiful new suit, the religious professional had convinced himself that he was dressed for spiritual success.

He tells the Laodiceans – and all of us who live like the religious professional, acting like we need nothing from God except to see ourselves standing center stage – that we are “wretched, pitiful, poor, blind and naked”.  The words apply to our friend the Pharisee, the proud religious professional in Jesus’ story in Luke 18.

The religious failure in Jesus’ story, the one who beat his breast and cried out for God’s mercy, ran off whatever stage he was commanding earlier in his life and ran into God’s heart because he knew he was wretched, pitiful, poor, blind and naked.

The message to the Laodicean church offers everyone who is willing to acknowledge their own poverty before God a gracious exit stage left:  “I counsel you to buy from me gold refined in the fire, so you can become rich; and white clothes to wear, so you can cover your shameful nakedness; and salve to put on your eyes, so you can see. Those whom I love I rebuke and discipline. So be earnest, and repent. Here I am! I stand at the door and knock. If anyone hears my voice and opens the door, I will come in and eat with him, and he with me.”  (Rev. 3:18-20 NIV)

…refine us, burning away the faux riches of adulation.

…clothe us, giving us true, beautiful garments instead of invisible, shameful costumes.

…heal us, so we can see Him and ourselves as we truly are.

…be welcomed into our lives, not as an audience member, but as a friend.

He is asking us to to exit stage left.

He is waiting for us in the wings, arms wide open, cheering.