Twenty-nine Christmases ago, our first child was a little baby girl just about able to sit up by herself for the first time. In the days leading up to Christmas, my husband and I knew it was time to think about one thing we could begin doing that would mark our own Christmas as a family. 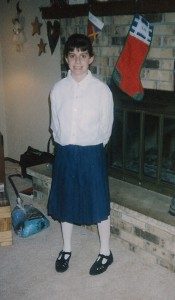 At that time, my husband and I had been married for four years, and had created a couple of scrappy holiday traditions out of the meager ingredients we each brought to the marriage. I brought a menorah and latkes (topped with sour cream) to the marriage. Bill’s family did a few Christmas basics – gifts under an 1960’s aluminum tree illuminated by a rotating light at its base, along with an occasional splash of Chanukah. The Van Loons were a reserved people, not particularly comfortable with exuberant celebration.

So Bill and I came to our own Christmas celebrations with a fairly clean slate. We wanted to honor the day we remembered the birth of Christ by keeping the day holy and our festivities simple. I did dream of those crazy-fun, fifty second cousins in a house, the sort of Christmas celebrations that a few friends of ours experienced, but that wasn’t what we were given to work with. We’d walked through our first few Christmases in the same way: a quiet Christmas eve at home eating appetizers and watching a movie (for years, It’s A Wonderful Life, broadcast each Christmas eve on PBS). Cinnamon rolls and gifts in the morning. A low-key gathering with the Van Loon clan on Christmas afternoon. 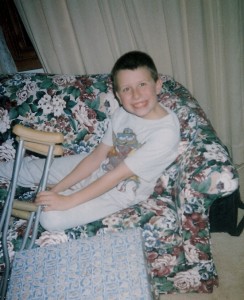 That little baby in our house nearly three decades ago gave us a reason to think about what we could do that would be unique to our family each Christmas. After finding a stash of sweet poems my grandmother had written to me each year on my birthday, I had an ah-ha! I would skip the rhyming and write a letter summing to our baby, and one to Bill. Bill would write a letter to the baby, and one to me. On Christmas eve, we would swap letters, then read one another’s aloud to the baby and to each other. We wouldn’t discuss the contents with one another – the first time we heard what the other had written was on Christmas eve as we read aloud.

The focus of the letters was blessing. As I wrote, I reflected on how I’d seen God at work in my daughter’s life, and in the life of my husband. What big milestones had happened in each of their lives during the previous year? What Scripture had God given me to to pray for each one? 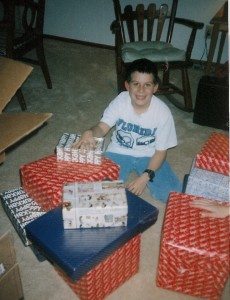 year. Christmas eve became our time to read the letters aloud, placing each child in turn between us as Bill and I opened and read one another’s letters to each one. Some years, our words have been carbon copies of one another’s; other years, our words couldn’t have been more different. When our three kids were all living at home, they used to put a box of kleenex in front of me before we’d begin reading the letters. Just the sight of those stack of envelopes opened the fire hydrant in me.

Now young adults, we no longer gather with our kids on Christmas eve. Whatever simple traditions we may have had as our kids were growing up are in a state of flux and change. We give the letters  now addressed to our kids, spouses, and grandkids, to read and reflect on their own. We still write each one and one another.

This single tradition has continued in spite of the changes and challenges our family has faced. I can’t imagine Christmas without it; the mark of an idea that became a tradition, growing deep enough to bear fruit in season and out of season – perfect sweet strawberries birthed each year in cold December soil.

If you like this idea, but the thought of piling on another thing to do 48 hours before Christmas makes you ka-razee, why not consider doing something like this for your family members on New Year’s?

One thought on “One sweet tradition”