Life lesson learned: If you are a Birkenstock girl, you should not slide on a pair of high heels right before you stand up in your friend’s wedding. You need to practice walking in them for days – weeks, even – before the big event.

I learned this lesson the hard way. Literally. I slipped and fell on my kiester on the shiny marble chancel  in front of 150 people or so, right in the middle of my friend Nancy’s wedding ceremony. The moment was captured for posterity on video. Thankfully, the camera was set up at the back of the sanctuary, so all you see is my head disappearing suddenly, followed by a horrified gasp from the crowd. I saw cartoonish birds and stars orbiting me in that moment, not unlike the ones Wile E. Coyote experienced after Road Runner pushed an Acme safe off the cliff so it fell on the hapless creature’s head. Pain zinged from my tailbone up my spinal cord and into the center of my brain. I wanted to roll into a fetal position on that icy slick marble while I waited for the hurt to ebb. 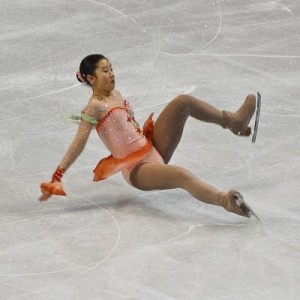 But another image came to mind in that very moment. I thought of Olympic ice skaters who attempted a triple lutz or whatever, only to land on their backside while the world watched and Dick Button breathlessly narrated the whole thing. Those skaters could have a compound fracture with jagged exposed shin bone dripping blood, and still, they’d clamber back onto their blades and finish their long program to thunderous applause.

If they could do it, I could do it. A member of the bridal party helped me to my feet, and the ceremony went on. I’m sure I stood hunched over (as close as I could get to a standing fetal position) while the birds and stars kept me company until the bride was kissed by the groom.

I had a broken tailbone and with a side of severely bruised dignity.

Today, I met Nancy for lunch. We don’t get to see one another very often, so we did what long-time friends do and began swapping stories about our families and our work. And then, almost as an aside, Nancy said, “You know, today is my 25th wedding anniversary.”

How I wished that I had remembered so I could have properly honored Nancy and her husband for this important milestone. I was honored that I’d been able to stand up (and fall!) in her wedding 25 years ago. But it occurred to me that though she’s faced some monumental life challenges during the last quarter-century that would have fried the faith of many of us, Nancy has always exemplified the grit I saw in my minds’ eye when I was splayed across the floor during her wedding ceremony. No matter what knocks her to the ground, she always climbs back onto her skates with determination and courage, and continues to perform her long program.

One thought on “Get up and keep skating”