One foot in front of the other.

The tracks their feet had made during the silent marches of the days before today were beginning to wear a rut in the sun-baked ground surrounding the walled city. Fully-armed men marching, the only sound the heavy cadence of their footfalls. They’d been instructed to carry their weapons, but had been prohibited from using them by their commander-in-chief.

I have wondered if any of them were tempted to murmur, to voice their questions about this unorthodox way of taking a city after a generation of wandering in the wilderness. Did they think that this was just more wandering? Could they trust that this was not just some absurdist Ring-Around-The-Rosie performance art – or a sign that they were undergoing still more discipline from God because they hadn’t yet learned their lesson?

I’ve made a few laps around the same issues in my life. I have almost always viewed the rut worn by my footprints as a symbol of my failure – a stint in remedial education because I didn’t “get it” the last time I faced the issue. 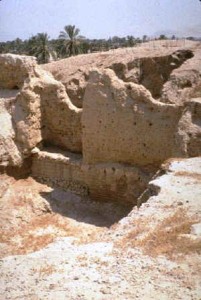 Usually when people speak about this story from Scripture, it is framed in terms of God’s miraculous deliverance, which it is. But when I read the story, I find myself imagining what it must have been like to be a Jewish foot soldier on say, Day 6 of this strange siege of Jericho.

It occurred to me recently that maybe I am thinking about these laps `round the same issues in my life all wrong, just as I have thought about what might have been going through the heads of the Jewish troops marching around Jericho in the wrong way. What if the laps around the same issues in my life aren’t a sign of some sort of failure on my part, but an opportunity to deepen my trust in God? I am certainly not the same person I was at 20 or 20 or 40. Could it be that God is asking me to bring what I’ve learned about him and myself from earlier laps into my latest leg of the journey?

Something tells me those soldiers were changed people by the time Day 7 rolled around and the walls of Jericho came down. They’d learned that there is more than one way to conquer an enemy – and they’d learned it as they’d done laps around the same seemingly-permanent walls day after day.

One thought on “Laps”