I am currently reading Carolyn Custis James’ thoughtful call to action entitled Half The Church: Recapturing God’s Global Vision For Women, which is an invitation for kingdom women to respond with kingdom intelligence, passion and action to the injustice in our world.
And then yesterday, I read this this fairly detailed description of men’s and women’s roles by a Pastor Mark Chanski on the Gospel Coalition blog. Honestly, I am not trying to rant about the GC crew. I mentioned them in a blog post last week, so I didn’t imagine I’d be talking about them again this week. But the dissonance between the kinds of women’s roles described by Custis James and Chanski’s prescriptive stance on masculine and feminine roles left me wondering anew how two people who would both self-identify as evangelical Christians who take their faith seriously could end up in such different places? 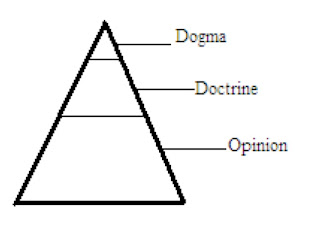 Someone explained to me years ago about the relationship between dogma, doctrine and opinion using the diagram above. The essence of dogma, those non-negotiable essentials of the Christian faith, can be captured in a creed like this one. Dogma is the small tip of the triangle in the diagram above. Get your dogma wrong and you end up inventing a cult.
Doctrine, the next section of the triangle, encompasses issues that distinguish the practice of a particular religious tradition. Get your doctrine wrong and you could end up being booted out of your church.
Opinion, the biggest section of the triangle, is everything else. That includes everything from worship music to leadership structures to the color of carpet in the church narthex. Depending on the crowd you run with, getting your opinion wrong may get you kicked out of your church and being told you’re going to hell, too.
That little diagram has been a big help to me as I’ve watched how well-intentioned Christians have defined what beliefs belong in which part of the triangle. It is amazing how many opinions end up becoming doctrine (or worse, dogma) for people. If you shove too much opinion into the doctrine or dogma part of the triangle, then it’s not really a triangle any more, is it?
Though I haven’t finished Custis James’ book, the one thing I’ve noticed is that there is a sense of empowering “can”, as in, “Women can get involved in putting a stop to sex slavery”. Her book appears to be about motivating her female readers to step out in faith in order to make a difference for others, no matter what life stage they inhabit. Her dogma enables her to analyze Biblical text in order to build her case, but the tone of her book most definitely falls into the category of passionately expressed opinion.
On the other hand, Pastor Chanski’s post is full of shoulds and shouldn’ts. Men should “…step up to the plate in Sunday School classes and prayer meetings in such a manner that their verbal contributions lead the way, and not leave a void, provoking the women to take over.” Women should “…extend hospitality in its countless forms. A Christlike, foot-washing, servant-hearted woman is a mighty kingdom weapon…Women are the church’s infantry.” I understand that the Gospel Coalition folks believe that their take on women’s roles is a non-negotiable that is a marker of a person’s understanding about Scripture’s inerrancy.
“Should” is the language of dogma. “Can” is the language of opinion.
And promise. And possibility.
My question for you: Should ‘should’ be a part of these kinds of discussions about men’s and women’s roles?
Sharing is caring!

4 thoughts on “Women can. Should they?”