Sometimes a single idea will anchor itself in your frontal lobe and won’t release itself from your brain until your thinking changes shape. A couple of weeks ago, I heard a thought that started to push on my thinking. Maybe you can help me understand why this man’s comment has been haunting me.
First, some background: Our last day in Jerusalem, we attended a forum where young Messianic and Arab Christian leaders talked about the challenges and opportunities they were facing in Israel. Some issues were similar to the kinds of next-generation issues we talk about in the American church: community, fragmentation, the influence of media, healthy models of discipleship. Other issues were definitely rooted in the unique political and social divisions that go back to the earliest chapters of the book of Genesis. The conversation and interchange of ideas was fascinating.
One leader said the thing that I can’t stop thinking about. He is a well-educated Russian Jewish believer who’d come to Israel during the great wave of post-USSR immigration during the 1990’s. He noted wistfully, “In Russia, I was a Jew. In Israel, I am a Russian.”
In other words, he has lived as an outsider in two distinctly different cultures. (Throw his faith in Christ into the mix and he becomes even more marginalized in both of those cultures.) He has spent a lifetime dealing with issues of identity. To complicate matters, the Church hadn’t necessarily been much of either a sanctuary or a place to help him embrace who he was and where he’d come from.
We quote Galatians 3:26-29 a little too glibly, I think. We use it to tell people that their identity, their tribe, doesn’t matter when it comes to faith. That’s true. Bloodlines can’t save people – faith in the finished work of Christ does. But who we are and where we’ve come from matters, or the distinction wouldn’t have been made in the book of Revelation: 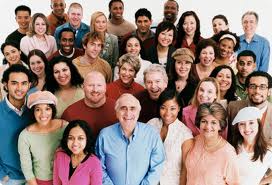 “After this I looked, and there before me was a great multitude that no one could count, from every nation, tribe, people and language, standing before the throne and before the Lamb. They were wearing white robes and were holding palm branches in their hands.” (Rev. 7:9)
The nations, tribes, peoples and language groups are distinctly different from one another – yet they all have the same Clothier, dressing them one and all in white robes. In their diversity, they are before Him, one people – His bride.
Focus too strongly on your tribal identity and you will plunge into racist thinking. Most of us understand that. But it is equally unrealistic to think that who we are and where we come from is irrelevant. We are, to drastically misapply a pop song lyric, born this way. Celebrating our tribal identity is a small but helpful short-term antidote to the effects of marginalization while we live on planet earth. And living into our identity as cherished sons or daughters of the King is the cure.

What do you think? Does “tribal identity” matter in the Church? Why or why not?

2 thoughts on “Born this way?”