Friends in liturgical churches are honoring Jesus’ mother Mary (Miryam) today/tomorrow. Suffice it to say that the various traditions have a pretty wide range of opinion about the way she lived and died. I can gladly rest in the fact that this faithful Jewish teen said ‘yes’ to the Lord in ways that most of us can begin to comprehend.
Because I use a daily devotional put together by an Orthodox priest, some of this morning’s readings focused on Mary, including this account where Jesus turned gallons and gallons of water into a beverage that even the wags at Wine Spectator magazine would have scored at at least a 95. It struck me as I read this account that most of us who’ve heard a sermon or two about Jesus’ first public miracle hear about a very different Mary than the sweet, innocent teen girl we put in our manger scenes at Christmas. 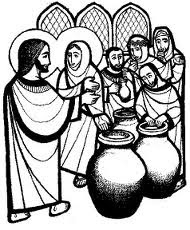 I’ve heard Mary at the wedding presented depicted in far less respectful terms, usually with a painfully bad Borscht-belt imitation Yiddish-flavored shriek:
“Oy vey, Jesus! Their simcha* is going to be the laughingstock of Cana with their dry bar. What kind of a wedding has no wine for the guests? Why don’t you fix it already, my number one Son? So why am I even asking, after all I’ve done for you? So you’re going to fix it already?”
Really? How did the humble, obedient girl described here become the pushy stage mom thirty years later at this wedding?
Scripture tells us that in the miraculous days after Jesus’ miraculous birth, Mary “treasured up all these things and pondered them in her heart.” (Luke 2:19) Did she gradually stop cherishing her miracle son and degenerate into the middle-aged harpie we like to imagine at the wedding?
I doubt it. She was there each step of the way, until the very last breath of his life – not a stage mom, but a follower, full of the same hunger and obedience that birthed her ‘yes’ the night her Son was conceived in her.
Strip the silly caricature from the story, and re-imagine the scene with a Mary who’d lived with this perfect Son, teaching him to walk and talk and eat. All the while, Mary was learning her Son, being taught by his purity, and perhaps, experiencing his ability to do a creative miracle or two in the privacy of their family circle.
What if her behavior at the wedding was simply the overflow of her no-longer-containable conviction that the kingdom of God was alive and among them?
What if we read her words at the wedding as if they were accented with joy, not pushiness?
*Simcha means joy, and is often used as a noun signifying a festive occasion.
Sharing is caring!