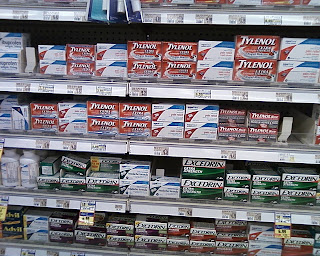 Yes, it’s a picture of shelves full of Tylenol and some of Tylenol’s pain reliever cousins.
Go ahead and ask the burning question: “Why do you have this picture on your blog, Michelle?”
To answer your burning question, I have to give a bit of backstory. A year ago, I had a job that required me to go sit in an office each day. Like all jobs, it had great parts (the students with whom I worked) and some not-so-great parts. But I knew it wasn’t exactly where I belonged. I am a writer, but I knew I needed to do something else to (a) bring in some sort of regular and non-imaginary part-time income and (b) get out of the house so I didn’t get wacky. When we were in Israel in February last year, I was praying with an amazing intercessor there, and the fully-formed thought came into my head:
Be a caregiver.
I didn’t argue right away, though the thought certainly blind-sided me. I viewed myself as more of a kid through young adult person than an old person person. The “Be a caregiver” thought was so shocking that I voiced it in the middle of our prayer. My prayer partner just smiled and nodded.
There was a small amount of context for the idea: I got to know some caregivers when my mom was in hospice care, and experienced first-hand each how amazing it was to have someone come into a hard, transitional situation and graciously do what was necessary to support a patient and the patient’s family. I became a caregiver fan. But it certainly wasn’t anything I imagined for myself. Evereverever. Never.
But sure enough, within a few weeks after I left Trinity, I was hired by a caregiving agency. I didn’t feel goosebumps or hear angels singing as I searched for a position. I simply followed the voice that had spoken that shocking thought to me.
Which leads, nearly a year later, to me standing in a drug store, taking pictures of Tylenol. I knew the lady I care for would never believe me if I told her the store no longer carried the formulation she liked. So I whipped out my cell phone and took a few pictures of the shelves so I could show her exactly what was in stock. Yes, I felt a little creepy doing this, but I knew it would help her understand what her options were when I came home empty-handed. (And it did!)
Like the last job I had, this job has some good parts (I get lots of opportunities to share my faith in word and deed; and it’s only part-time!) and some bad parts (I’d be better at the job if I had some mind-reading skills; my client keeps the thermostat in her house set at about 87 degrees).
Was The Great Tylenol Caper one of those good parts or one of the bad parts of the job?
You decide.
Sharing is caring!

One thought on “The Great Tylenol Caper”