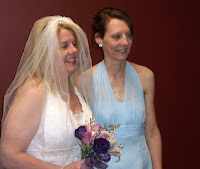 “Steps To Peace With God”, a variation of the “Four Spiritual Laws” tract so popular in the 1970’s, was laying on the dining room table when 18 year-old Bill picked it up and began thumbing through it. His mom had recently started attending a neighborhood Bible study, and she’d occasionally drop a tract or two onto the table, perhaps hoping to spark a conversation with the fam about what she was learning.

The little tract’s spare message spurred Bill to grab an old Bible off the shelf and begin reading the gospel of Matthew. Three days later, when he’d finished, he had surrendered to Christ. Eventually, each of Bill’s siblings followed suit.

One of his sisters allowed her faith to go dormant as she entered adulthood. It didn’t appear she’d walked away from her faith as much as she’d simply drifted away, busying herself with the pursuit of other things. She was single, and so had the time, drive and focus to work the long hours it took to build herself a successful career over the next couple of decades.

And then she lost her job. A long, scary unemployment forced her to re-evaluate her choices. The good life she’d built was a hollow facsimile of the abundant life promised her by her Savior. She repented, and began the search to connect with a church family – a daunting task for an older single. But she hung in there, and discovered a welcoming congregation not far from her home.

She’d been attending the church for a few years when a quiet gentleman who’d recommitted His life to the Lord not too long after she had began to notice her at church activities. She’d noticed him, too, and had begun praying for her new friend.

And yesterday, at age 49, this woman became a bride for the first time.

Though the wedding was a very simple “cake-and-punch-in-the-church-fellowship-hall” affair, there was nothing simple about it. It is a parable in the flesh; an extravagant story of unexpected blessing from the heart of the Father in the lives of two people who sought Him first and found each other.

And I couldn’t help but think that the little tract tossed onto the Van Loon dining room table in the early 1970’s was the real beginning of Georgina and Larry’s love story.

2 thoughts on “Steps To Peace With God: The Sequel”