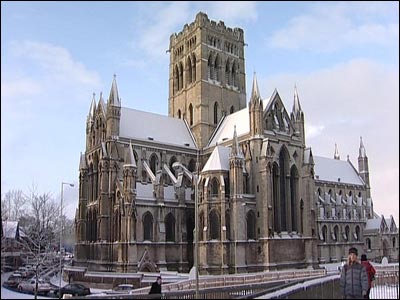 Oh so much has been written about the consumerist nature of western Christians. But as I was reading Tim Keel’s excellent book Intuitive Leadership: Embracing a Paradigm of Narrative, Metaphor and Chaos (Baker 2007), I had a wee ah-ha moment. Keel mentions that us sheep aren’t the only ones wandering from pasture to pasture, church to church.
He pointed out that many of our leaders engage in the same hunger-driven behavior. Looking to upgrade their resume, buff their experience, and be where “it” is happening, there are some church leaders who move on in order to move up. Like in college football, the evangelical world doesn’t have an official ranking system. “Moving up” is more a state of mind or bragging rights than actual measurable distance”up”. Though the evangelical world doesn’t have sportswriters spinning out weekly rankings (“Saddleback has slipped to number six this week due to quarterback Rick Warren’s pulled hammie“), there is this funny pecking order that exists in the minds of an awful lot of these leaders. This order is based on things like a church’s size, positive secular media attention, cutting edge-ness… It is invariably signposts of human success/power that shapes these rankings.
I’ve heard enough present- and future-pastor conversations both at the seminary where I sometimes work and among church leaders I’ve known to know that Keel’s words about some spiritual leaders’ ambitions are true. (Not all, for sure – but a fair-sized some.) So at least in some cases, the motivations of leaders and of congregants each in search of some kind of church “upgrade” aren’t so different from one another.
What drives people forward to greener pastures, a different church, a better “ministry job” (as if there was such a thing as a ministry job)? No matter who the person is, there’s hunger driving them on and out (and, in some cases, up). I have a friend who lost about 40 pounds a few years ago by learning to eat only when she was truly hungry. She learned that most of her feelings of hunger were actually feelings of other kinds (boredom, anger, anxiety, unthinking responses to food commercials on TV).
How do we learn to listen to the hunger so we can learn what real hunger feels like? How do we learn to understand that what we call moving on, moving up, moving out is what we often call “hunger for God” but might not be hunger at all?
Sharing is caring!

2 thoughts on “Upgrade me”