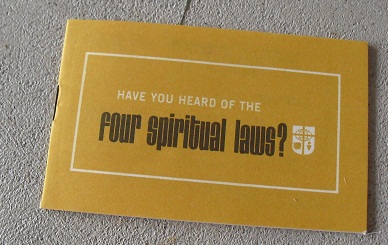 Something tells me Dietrich Bonhoeffer wouldn’t have been a fan of the Four Spiritual Laws tract.

More than 2.5 billion of these tracts have been printed and disseminated over the last few decades. The little booklet sketches four core talking points about the person and work of Jesus (God loves you and has a wonderful plan for your life, humans are sinful and separated from God, Jesus is God’s  provision for your sin, and we must individually receive Jesus as Savior and Lord – only then can we know God’s wonderful plan for our lives) and offers a short prayer of commitment for those who can affirm those truths. The tract was meant to be a conversation starter, and it and others like it have launched many people including my own husband into a new life of faith.

But it offers an incomplete sketch of what this new life will require of us. I’m blogging through Dietrich Bonhoeffer’s The Cost of Discipleship. Originally published in 1937, Bonhoeffer’s unflinching  words stand in contrast against the backdrop of the stranglehold of fascism in his beloved Germany. And, I’m rediscovering as I read, they are an equally-jarring contrast to our own political and religious landscape.

You can only learn what obedience is by obeying. It is no use asking questions; for it is only through obedience that you come to learn the truth.

In Chapter 2, Lutheran pastor Bonhoeffer addresses the soul-killing effects of the “all grace, all the time” messaging of too many of his fellow Lutherans. Four hundred years of living off of Luther’s revelation of salvation by grace had left the German church spiritually lopsided. “The call goes forth and is at once followed by the response of obedience,” Bonhoeffer writes. “The response of the disciples is an act of obedience, not a confession of faith in Jesus.” To contextualize it for our culture, affirming a set of propositions about Jesus is not what discipleship is about, contrary to the Moral Therapeutic Deism and prosperity messaging that has saturated too many of our churches in the last few decades.

Obedience is an unflinching word, Bonhoeffer reminds us. Those who would divorce faith from obedience end up sending their followers down one of two wrong paths – and ironically, both of those divergent paths end up at the very same destination:

He then underscores his point by looking at Jesus’ interaction with a wealthy young man, found in Matthew 19:16-22. The young man was looking for loopholes. Bonhoeffer of this man, “He neglects the unmistakable command of  God for the very interesting, but  purely human concerns of his own moral difficulties.” Jesus tells him that there is no loophole. Following Jesus means we can no longer choose our own Religious Adventure, deciding for ourselves what is good and what is evil based on our circumstances, feelings, or schedule. Following Jesus isn’t what we do when we don’t have anything better to do. Nor does it come with a safety net (like a big bank account). Jesus “bids him embrace voluntary poverty…(this) springs from Jesus’ love for the young man, and it represents the only link between the old life and the new.”  Jesus was calling him into full, unfiltered relationship; the money was this man’s master. There can be no other gods in a life of obedience.

Bonhoeffer then ends the chapter by noting that this exchange was paralleled by Jesus’s exchange with a lawyer looking for a loophole in the definition of a neighbor in Luke 10:25-29:

The final question “Who is my neighbor?” is the parting shot of despair (or else of self-confidence); the lawyer is trying to justify his disobedience. The answer is: “You are the neighbor. Go along and try to be obedient by  loving others. Neighborliness is not a quality in other people,  it is simply their claim on ourselves. Every moment and every situation challenges us to action and to obedience.

Even if your experience of Jesus is based on the equivalent of agreeing with a few words in a tract, Bonhoeffer would urge you to know God by learning what obedience to him looks like, and then to watch your faith deepen and flower into a full, costly, beautiful life of discipleship.

Reflect: Have you been in church circles where faith (via mental assent to a set or propositions about God) was emphasized over obedience? Conversely, has action been emphasized to the detriment of relationship with your Savior?

Prayer: Lord, you call me to faithandobedience, a single word, an unbroken response to you. I want to love you with faith leading to obedience, and obedience leading to faith. I receive your love in faith, and release it to the world around me in obedience. I pray these things in the name of the One who is calling me to follow him in these things. Amen.