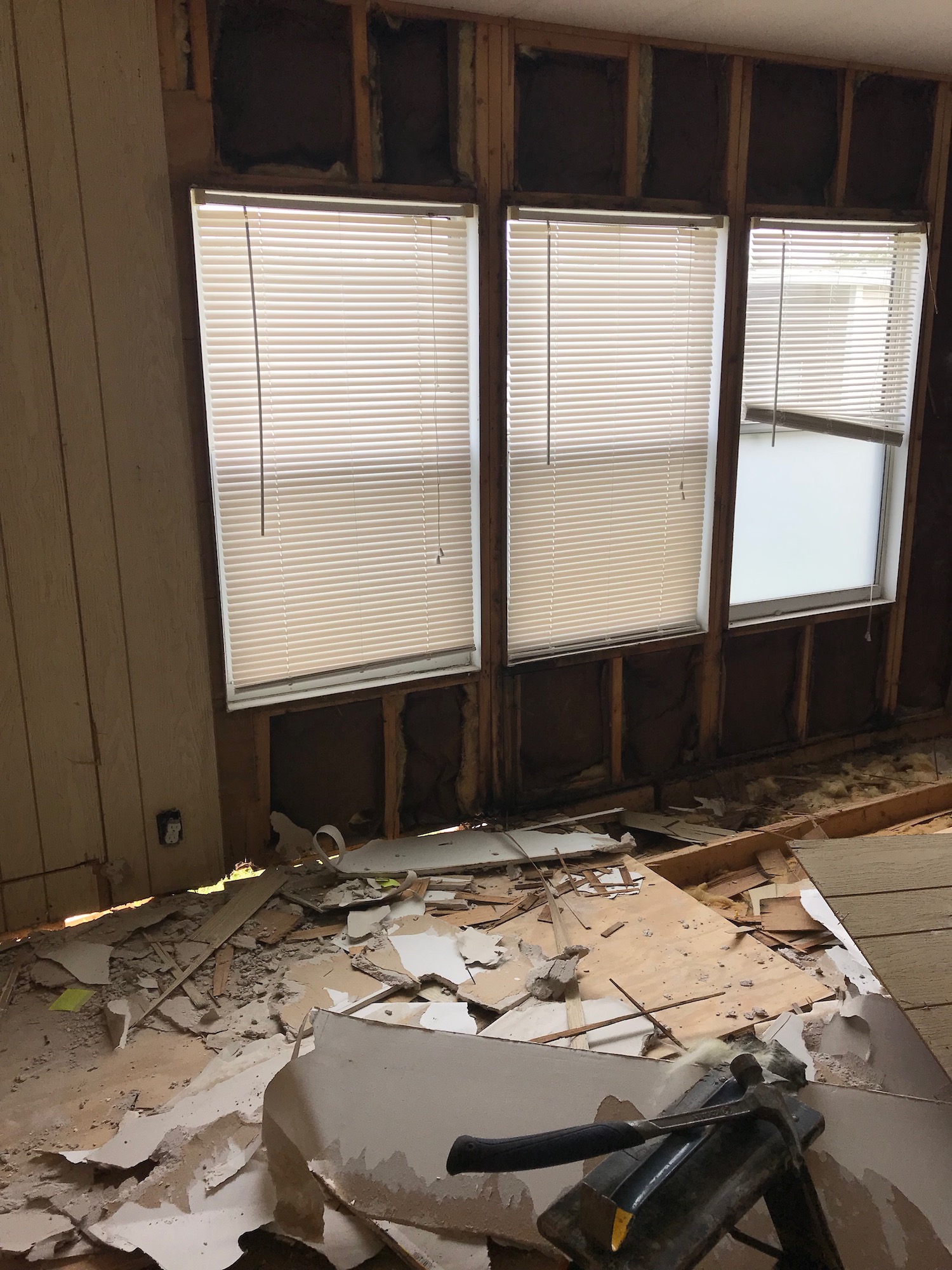 What’s under the surface?

We had a home inspection before we purchased our 1970’s-vintage mobile home in April, 2019. The inspector told us he saw evidence of a bit of termite damage, but assured us it was par for the course in a sub-tropical climate like Florida. We planned to get an exterminator after we did a bit of renovation, which included installing some new floors. The house was a patchwork of laminate flooring. The first surprise when we peeled back the layers was to discover a couple of other layers of flooring (below). 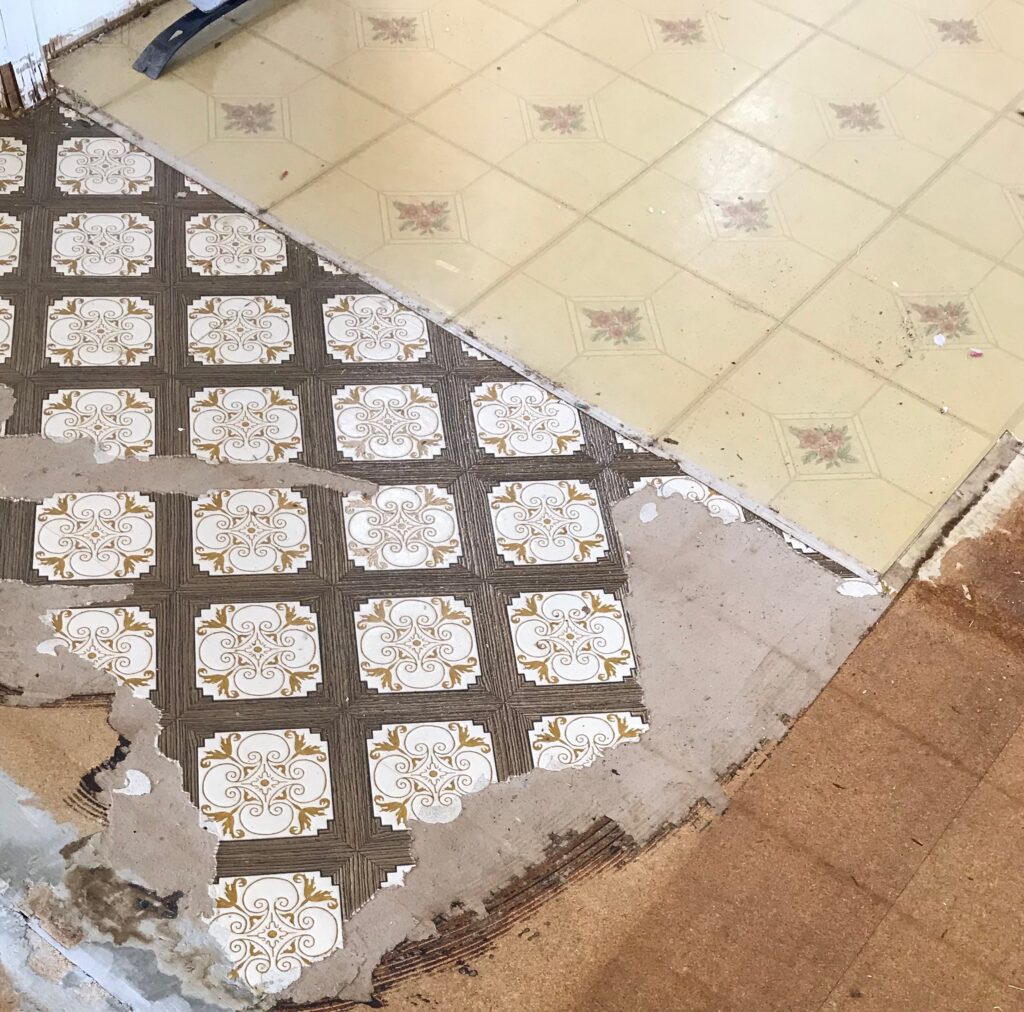 That would have been little more than an interesting bit of late twentieth-century archaeology if that was the only surprise lurking beneath the cheap veneer flooring. But when we peeled back those layers of flooring, we discovered there was no floor at all along major portions of the east side of our house. The picture below is the day the contractor had torn out not only the floors but the walls to reveal the extent of the damage before they could begin rebuilding. 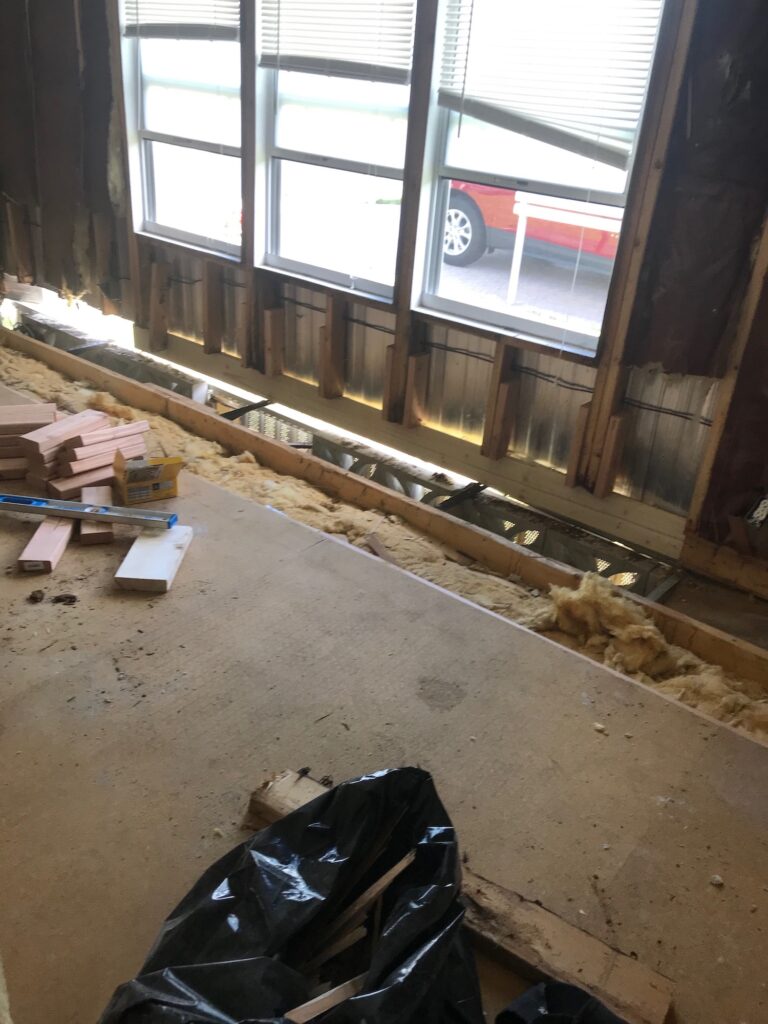 My regular viewing of HGTV renovation shows could not prepare me for the shock of discovering that I could see the ground through my living room floor thanks to the hearty appetites of the termites who’d used our house as a bed and breakfast. Not only had the home inspector missed the extent of the problem (it wasn’t the only thing he missed!), we realized that if we hadn’t elected to tear up the flooring and replace it with something from this millennium, it is likely we would have fallen through the old floor at some point. After the house was repaired and new flooring installed, we had the house tented and the contents gassed so that we could kill off any termites who hoped to stay.

In the first weeks of the stay-at-home orders, as the shock of the effects of COVID-19 were first becoming known, one thing became evident: this invisible enemy would reveal what was lurking just beneath the veneer of each one of our lives, as well as cultures, systems, institutions, and nations.

We’re still at an early point in this veneer-stripping period, and just beginning to have a good look at what’s under the top layer of our lives. I’m a little surprised at what’s I’m finding just beneath the surface.

I’m discovering there’s fear I didn’t even realize was there, chewing away at my soul.:

I’m also discovering under the surface I have some significant pockets of anger:

Old grief lurking under the surface was reawakened as I mourned new losses big and small – not seeing my family, a trip to Israel, a book releasing at a time when people were hunting for toilet paper and losing their jobs by the millions, coffee with a new friend at a sidewalk cafe, browsing the stacks at the library, a speaking engagement, a Target run. I had some wonderful plans for my life in 2020.

It turns out those plans were a veneer.

Now listen, you who say, “Today or tomorrow we will go to this or that city, spend a year there, carry on business and make money.” Why, you do not even know what will happen tomorrow. What is your life? You are a mist that appears for a little while and then vanishes. Instead, you ought to say, “If it is the Lord’s will, we will live and do this or that.” (James 4:13-15)

There is much I can not understand about God’s purposes in this world. But I do trust his character. He is peeling away the veneer, and I believe he is in the midst of it all, near to the sick, the suffering, the weak, the afraid, the angry, the grieving…you…me…and he is repairing the world he loves.

I will leave you with this prayer from our Greek Orthodox siblings in the faith for this COVID-19 era. May it bring you consolation today: https://www.goarch.org/-/prayers-of-protection-from-the-coronavirus