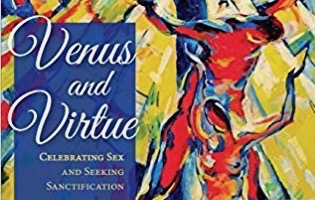 We in the church are being discipled by our culture in the area of sexuality, whether we believe it to be true or not. In response, we’ve either chosen to adopt those values in the name of relevance or have presented a reactive “no” as an alternative narrative. Before I came to faith in Jesus in my mid-teens, I was pretty promiscuous. As I moved into adulthood and began raising my own children, though I understood the why being the “no” narrative, I think I often framed that “no” in terms of my own painful teenage experience. Though I could quote Bible verses to support the “no” (sex between one man and one woman within the bounds of marriage), I’ll confess I didn’t have a very deep understanding of the the why behind those boundaries – nor of all of the yesses that God intended to flourish within those boundaries. Instead, I think I oversimplified a lot by passing on without much comment beyond sharing my own horror stories what I’d learned from the church about sex: “Just say no until it’s time to say ‘I do’ to a person of the opposite biological gender.” 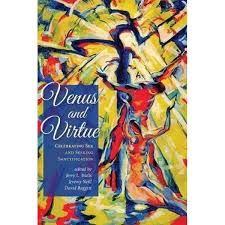 I would have benefitted greatly back then from a book like Venus and Virtue: Celebrating Sex and Seeking Sanctification. Though this is structured and presented as an academic volume containing essays from a variety of contributors, editors Jerry Walls, Jeremy Neill and David Baggett have kept the focus on thoughtful discussion and mature application rather than arcane academic hair-splitting. Walls notes in the introduction, “In this book we will argue (as will be apparent from our title) that Christianity presents a morality of celebration, not one of castration.” Just say no does not contain an invitation to celebration, no matter how attractive the envelope might be.

The contributors to Venus and Virtue are drawn from a wide variety of academic and professional streams. They include professors such as Erin Dufault-Hunter (Fuller), Raymond Phinney (Wheaton), and Lawson Stone (Asbury); pastors such as Jay Thomas (Chapel Hill Bible Church) and Gerald Heistand (Calvary Memorial Church); a lawyer, Mary Rice Hasson (Ethics & Public Policy Committee); and writers who regularly address issues of sexuality in their work such as Anna Broadway, Brett McCracken, and Ron Belgau. There are at least a couple of essays in the book that present differing viewpoints on a debatable topic, such as the pair of essays about the topic of masturbation by Matthew Dugandzic and Erin Dufault-Hunter. I appreciated the interchange – one calling for chastity and restraint, the other suggesting that there is a way to bring virtue to bear in this area.

The book is broken into four main sections. The first contains 4 essays exploring Biblical and theological foundations of human sexuality. The next section, addresses sexuality for singles with 7 essays. There is a section with three essays tackling same-sex attraction, and the book closes with a couple of essays on pastoral response and responsibility.

The Bible teaches us that intimacy between men and women is about so much more than “sexy.” sex—intimacy—is about helping your wife recover for months from a very difficult delivery of a baby you sort of had something to do with. Real sex is about loving a spouse’s wrinkles and grey or thinning hair . . . or no hair because of the chemo. Sexual intimacy is about sitting by the bed wishing you could be the one suffering instead of them. sexual intimacy—“one flesh”—is an eighty-something-year-old man snuggling in the hospital bed next to his dying wife, holding her in his arms, softly singing hymns to her through the night as she crosses over. Sex is feeling out of balance when you have to go without your wedding band for some reason. it’s about staying together through times when you don’t feel in love, don’t feel dedicated, and don’t feel committed, but you remember that before God and his church you made a promise, a covenant, and you’ll honor it—and discovering that those who keep faith with that formal, so- called legalistic boundary inhabit a garden of satisfaction and joy known only to those who surrender to its secret.

– Lawson Stone, Chapter 1, “Garden of Delights and Dilemmas: The Old Testament on Sex”, Venus and Virtue

Though all the essays were of value, I found the section on singleness had the most relevance to my own life. Though I’ve been married for nearly 39 years, I have many friends of all ages who are single. As nearly half of all adults in this country are single (and hello, this includes the Church, where we often focus our efforts solely on the nuclear family), the essays on topics ranging from why younger believers cringe at old-school sexual ethics, making out, what it means to exercise morality in the area of sexuality, and the aforementioned debate around masturbation have immediate practical application in the kinds of conversations I am privileged to have with single friends. If there is one omission in this section, it is about discussing sexuality among singles at midlife and beyond – many of whom are making choices in this area of their lives they never would have dreamed of making when they were younger.

This is a book that belongs in the hands of every pastor, and particularly those who are working with youth and young adults. I also believe that many of those who are mentoring or discipling younger people would benefit greatly from engaging with the readable essays in this book. Even if you think you’ve settled the questions of sexuality by just saying ‘no’, I can guarantee those in generations younger than you are grappling with the subjects addressed in Venus and Virtue. I commend this book to you.

Note: I received a review copy of this book from one of the contributors, but the cost I paid for the book ($0.00) did not affect my feelings about it in any way. 🙂