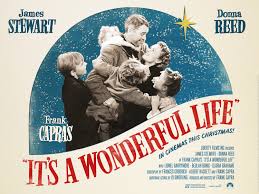 It’s A Wonderful Life: Love it or loathe it?

Few people are neutral about the film. Either they celebrate it as an affirmation of life and the power of community, or they scorn it as a sticky-sweet bit of sentimental rubbish. I am unapologetically in the former category, and this summer has reminded me why that is.

The movie tells the story of George Bailey, who wrestles his big ambitions into faithful, if financially-unrewarding service to family and the people of Bedford Falls. Though I’ve watched it at least once a year since I got married – 38 times! – I still get choked up at the final scene. A Job-like pile-on of events bring George to the brink of suicide. After he discovers how many lives he’s touched with his own, he returns to his home prepared to face the consequences for a crime he didn’t even commit. To his surprise, his family and friends rally around him, paying off George’s enormous debt and celebrating his excellent character. George’s guardian angel, Clarence, reminds him that he is a success as a human being, telling him: “Remember, George: no man is a failure who has friends.”

I have witnessed the power of friendship this summer in ways I never would have dreamed. So much appears to be falling apart in my life right now. Maybe to some it looks like failure – of faith, of planning, of ___ (fill in the blank with your own idea of what will net you a problem-free life). Thankfully, I’ve discovered that God has gifted me with the kinds of friends to which Clarence referred.

I’ve had many people comment on the number and intensity of tests and trials my husband and I have faced during the last two years. My reference point for these things is the book of Job. My take-away from the book? God does not ever explain to Job why he has experienced so much loss and suffering. God doesn’t even give Job a hint. He simply draws near to his friend Job, points to the world He has made and reminds the broken man of his sovereignty over all of creation. I have learned from Job’s experience to ask how I can be faithful in the midst of the trials rather than demanding an explanation of why these things are happening.

Job might well have questioned George Bailey’s guardian angel’s contention that friends were a sign of success in life, since Job’s “friends” served as judge, jury, and prosecuting attorney trying to solve the mystery of why Job was suffering. If Job’s friends were going to make a movie about Job, they’d probably call it, “You Have A Sucktastic Life, You Big Loser – And You Probably Brought It All On Yourself!” During an earlier period of testing and trial in my life, my Christian social circle was filled with people like Job’s friends. They had prescriptions and cures in mind for what ailed me, because what ailed me was obviously a flaw in my faith and a chink in my spiritual armor. I needed to be fixed or remedied, not supported or aided. Every time I watched It’s A Wonderful Life, I was struck by the contrast between George’s friends and some of my own judge-y ones. Once upon a time, I knew too many like Job’s friends and too few like George’s.

That is no longer the case. I am grateful I no longer have Job’s friends in my life. My current circle includes the kinds of friends portrayed in Capra’s transcendent film. People have showed up in our lives offering stunning and generous financial assistance, and books, cards, a quilt, flowers, and food. Some of these people don’t even know us well. Others have been long-time pals. All have helped Bill and I to remember God’s sovereignty, and have echoed God’s nearness to us. Their friendship models faithfulness to us at a time when we are longing to know what faithfulness to God looks like as we limp through this long, dark valley.

These friends have reminded me that despite our difficult circumstances, I do indeed have a wonderful life.