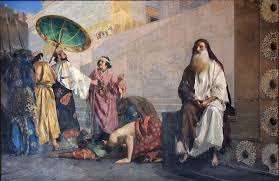 The Jewish feast of Purim took place this year from sundown Saturday, March 11th through sundown of the 12th. It is for me an opportunity each year to revisit this remarkable story of survival in the face of super-size, demonic anti-Semitism. The book of Esther found in our Bibles never once mentions God’s Name, yet his unseen hand is visible in every moment of this drama. I’ve always loved Queen Esther’s brave words when faced with the news from her uncle Mordecai. He informed her that her people were facing a genocide, and warned her that her position of privilege the household of King Xerxes would not shield her from the mass murder being planned by the king’s highest-ranking minister, Haman. It is a goose-bump inducing moment every time I read this exchange between Mordecai and Esther:

(Mordecai) sent back this answer: “Do not think that because you are in the king’s house you alone of all the Jews will escape.For if you remain silent at this time, relief and deliverance for the Jews will arise from another place, but you and your father’s family will perish. And who knows but that you have come to your royal position for such a time as this?”

Then Esther sent this reply to Mordecai: “Go, gather together all the Jews who are in Susa, and fast for me. Do not eat or drink for three days, night or day. I and my attendants will fast as you do. When this is done, I will go to the king, even though it is against the law. And if I perish, I perish.” (Esther 4:13-16)

While we rightly celebrate Esther’s courage, creativity, and humility in responding to this existential threat, this year I’ve been pondering the contributions of Mordecai to this story. Specifically, I’ve been moved by the way in which Mordecai used his influence to effect change. Until Mordecai challenges his niece to act, Esther reads to me as a fairly passive player in this story.

While not all of us hold a position of power as Esther did, each one of us has the ability to influence others the way Mordecai did. For those of us who may be wrestling with how to exercise godly influence in a turbulent culture, a few observations drawn from what’s recorded about Mordecai in the book of Esther:

(1) He wasn’t seeking a place of influence. He was first and foremost, a man who’d allowed his character to be refined in exile as he did the right thing on the daily. There is no mention in the book of Esther of a Mrs. Mordecai, and the text indicates Mordecai functioned as a single father as he raised his orphaned niece. The influence he had with his niece – which eventually extended to places he never could have dreamed when he began caring for Esther – flowed out of relationship, and that relationship flowed out of Mordecai’s godly character.

(2) He was an upstanding citizen within an alien culture so long as this citizenship did not conflict with his primary identity and calling. He uncovered an assasination plot that would have taken out King Xerxes, and funneled the information on to his niece, who was in a position to communicate the information to the king. However, his primary loyalty was not to Babylon, but with his own people. His actions were consistent with someone living a Torah-observant life, but those actions eventually put him at odds with the dominant culture. His refusal to bow down to Haman emerged out of his primary identity as a Jew, which shifted him from the category of being a good subject to being branded a threat – along with all the other captive Chosen People living in Babylonian captivity.

(3) He understood that he needed to be strategic in his role as a member of this minority community as it related to the powerful leaders of the majority culture around him. As she was drafted into contention for the role of Queen of Babylon, Mordecai coached her to keep mum about her nationality. She revealed it only after she’d racked up a track record of dutifully following the rules of the king’s court. The revelation came with maximum risk, given the overheated political climate (Exhibit A: Haman), but also maximum impact. Mordecai demonstrated that he understood there was a proper time to blend in and not rock the boat, and a time to dive into the water headfirst, and coached his niece accordingly.

In this era of branding, image management, and the quest to build platform, Mordecai reminds me that godly influence is birthed from character, expressed through wisdom, and lived out via my primary identity as a beloved, chosen citizen of the kingdom.

(This post first appeared on the Jesus Creed blog)