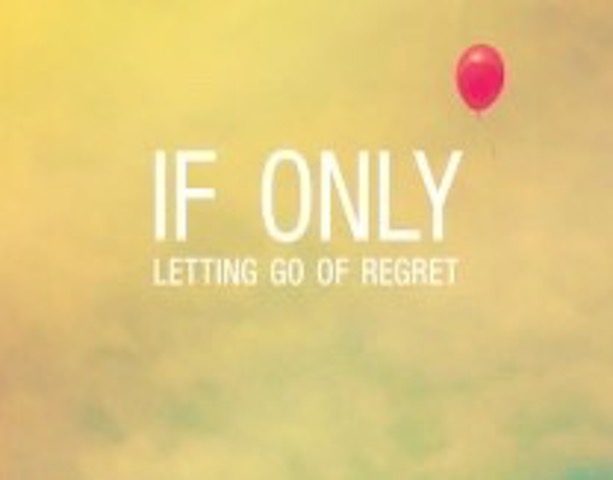 This past weekend, I heard an expression of regret from a man who had shaped the faith and politics of thousands of of people over the last two decades. The chastened accounting of some of the damage he’d done was a rare and welcome admission. Though it has come so late in the game, I am a firm believer in the old adage that it is never too late to do the right thing. If that’s the case, his admission came right on time.

I have spent of time pondering the subject of regret. In fact, I even wrote a book about it, and I could probably write a sequel or two. My thesis for If Only: Letting Go Of Regret was simple and impossible: Nothing is beyond God’s ability to reclaim, redeem, and repurpose, which sounds like a tidy, annoying little three-point sermon. However, my book is the opposite of a three-point sermon. The redemption process isn’t tidy or simple, because that’s how real spiritual growth works in actual complicated, beloved human beings.

A little back story to the events of last weekend. When my family moved to Wisconsin in 1995, one of the first things that helped me get a sense of the new subculture in which we were now living was when I did a survey of the media landscape. We’d relocated from big market Chicago, so it was a bit of a shock to realize that a smaller market like southeastern WI meant newscasts were a lot more low-budget and folksy. The traffic reports slayed me: “Nine minutes from the Zoo interchange to Downtown”, a reporter would say in a worried, paternal tone during the morning news. “Allow yourself some extra time this morning.” Nine minutes? Seriously? In Chicago, the only thing that’s nine minutes from the downtown Loop is, well, the Loop.

In 1995, we were dependent on radio in ways we aren’t today now that podcasts and digital media players allow us more autonomy over our driving and background music choices. The radio landscape in Milwaukee back then was the standard FM menu of pop, metal-lite, classic rock, country, a couple of Spanish-language stations, NPR, and on the AM dial, lots of talk radio and a polka station. Rush Limbaugh-style red meat radio was on the rise, and Milwaukee had a couple of local conservative talkers who captured a lot of market share. One of them was Charlie Sykes.

It seemed most everyone we met in the churches we attended and home school circles in which we moved listened to either the AM talkers, or the more extreme Christian version of the talkers teetering at the far right edge of the FM dial, Vic Eliason’s WVCY. (I’ve previously written about the WVCY effect on our fellows church members here, here, and here.) Though the AM talkers were secular and the talk programming on WVCY was fundamentalist in orientation, the content of both was pretty much a Venn diagram with two overlapping circles. ‘VCY included more KJV Bible verses and an obsessive focus on exposing all heresy in their broadcast area as well as uncovering the evil schemes of overreaching liberal politicians, and Sykes and his local AM compatriots occasionally talked about things like sports and stuff in addition to giving a daily verbal beat-down to those same politicians. Most of the time, the subject matter was pretty much the same on both the AM and FM talk shows, where the primary theme was The Decline And Fall Of Western Civilization Because Of The Democrats. I tried listening, as I’m a social conservative. But the vitriol got to me after a while, and I turned it all off. It didn’t matter whether I listened or not, as I got the gist of whatever these men (and one woman, on WVCY) were angry about each week in conversations, with a few juicy End-Times conspiracy theories mixed in for some additional adrenaline from people we hung around with.

Fast forward to yesterday. Sykes wrote a sad op-ed that ran in Sunday’s New York Times. The piece is called, “Why Nobody Cares the President Is Lying“. In it, he acknowledges the role he played during the last two decades in delegitimizing mainstream media – a perfect Petri dish where a nationalist like Donald Trump could build a base. Sykes didn’t support Trump, which may or may not have led to his exit in December, 2016 from a plum broadcasting job he held for years. Sykes wrote:

For years, as a conservative radio talk show host, I played a role in that conditioning [of his core audience] by hammering the mainstream media for its bias and double standards. But the price turned out to be far higher than I imagined. The cumulative effect of the attacks was to delegitimize those outlets and essentially destroy much of the right’s immunity to false information. We thought we were creating a savvier, more skeptical audience. Instead, we opened the door for President Trump, who found an audience that could be easily misled.

I hope you’ll read the whole piece. The piece throws bare the way in which Sykes and many other religious and secular conservative talkers conditioned their audiences for a generation toward the kind of post-factual nationalism that suddenly made a boorish billionaire reality TV star the only logical voting choice for their listeners. (And a healthy percentage of those listeners are church folk.)

The Sykes piece offers a picture of a chastened man who recognizes the rotten fruit growing from what he’s sown day after day after day through the years. There is no “do over”. But by stopping it, naming it as wrong, and beginning to cut a new way forward, Sykes may spark a bit of unease among some of his former followers. That unease is what’s needed to disrupt the lockstep thinking with the gift of a few doubts and questions that may serve to create space for other voices to become part of some of his listeners’ thinking. Charlie Sykes is showing his listeners that the way out of the echo chamber is through humility and honesty. This confession is startling mostly because of its rarity. How I wish more of Charlie’s fellow (and sister) broadcasters would follow suit – especially those from the Christian community.

We in the Church would do well to consider how to cultivate humility and honesty among ourselves. When we create this kind of culture among ourselves, repentance becomes a normal part of our life together, instead of something saved only for an altar call, an emotional response to a spiritual zinger in a sermon or worship song, or as a brief prayer reminder in the liturgy leading into communion. “I was wrong”, “I’m sorry”, “I don’t know”, “Please help me learn how my words and actions affected you”, and “Lord, against you and you only I have sinned by what I’ve done and by what I’ve left undone.”

During our years in WI, my desire to be included meant I participated in too many of those unhealthy conversations formed not from good theology, but from bad radio. Who knows where the ripples from those conversations went? We can’t undo the mess our pride and triumphalism has created. Our acts and words ripple into the lives of others far beyond the initial moment of impact, in ways we can’t see. (Charlie and Vic likely never imagined that their teaching formed the theology and world view of so many in the churches we attended.) But when we humble ourselves, turn to God, relinquish our need for control/winning, and then tell the truth, we will be the people we’re called to be.

In the wake of the election, have you seen a renewed commitment to repentance and humility among the church members and leaders in your “in real life” world? Or has the focus among them been talk-radio/alt media-fueled triumphalism that dehumanizes those who bear opposing political or spiritual views? If it is the latter, how does this jive with the call of Jesus in your life to make disciples?

Humble yourselves before the Lord, and he will lift you up. – James 4:10