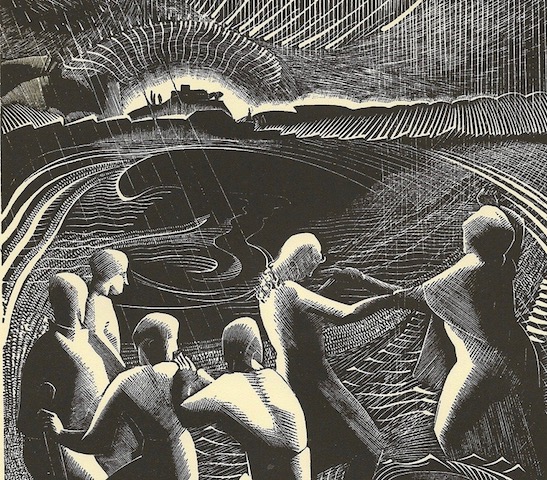 The world-weary author(s) of Ecclesiastes seems to have been well-acquainted with privilege and power. This voice is named only by title (Qohelet*, often translated as “preacher”, he’s a sage who knows what’s what) and a “son of David” (a ruler in his own right and a heir of the king; some suggest Solomon, but Bible scholars have lots of other ideas about the identity – or identities – of the author[s] of this book).

I thought about the “been there, done that” way in which the book opens:

These are not the words of an idealistic 18 year-old. They are not the realistic-but-hopeful words of 42 year-old philosopher George Santyana, who said, “Those who do not remember history are doomed to repeat it”. They are, instead, the words of someone who has lived a long time, and has seen first-hand that generational amnesia is as much a part of our fallen human condition as are the common cold and pimples.

I don’t need to tell you we’re in a new era in America – or, more accurately, the logical next step of where we’ve been headed for years. Prognosticators like The Atlantic’s David Frum trying to peer into the future don’t hold out much hope that things will get better, brighter, and easier any time soon. Even Trump’s supporters seem steeled for a level of conflict we haven’t seen in this country since the late 1960’s and early 1970’s. Frankly, I suspect the conflict happening today eventually may well eclipse that of those tumultuous years, amplified like a stadium full of cranked-up boom boxes by social media and the 24-hour news cycle.

A few months ago, I wondered who we as the church would be after a searing, toxic campaign. I’m still trying to wrap my head around the most surprising stat from the election – you know, the one that said that 81% of white Evangelicals voted for Trump. Though others have contested that figure, it is safe to say that a lot of the people in the circles in which I’ve traveled in the past – from Fundamentalist to Charismatic to Evangelical to Messianic Jewish – were on Team Trump. Some voted holding their noses, others were true believers. Though the language of making this country great again seems to reference history, instead it is an unexamined sort of nostalgia for a past that never was, and blind hope for a future filled with all the promises of the prosperity gospel preachers. The other 19% of us were probably divided fairly evenly between true Hillary Clinton fans and those who were voting third-party in protest.

One thing has become crystal clear as we’ve moved into the Trump era: Evangelicalism’s habits of youthfulness and pragmatism are not especially welcoming to Qohelet. Though I noted above our generational amnesia is a part of our human condition, we who wish to be known for our love of the Bible and our living relationship with the God of the Universe have access to the supernatural. We tend to think of signs, wonders, and miracles, but that power extends also to things like forgiveness, courage in the face of suffering, and remembering. This remembering includes connecting to the communion of saints who’ve gone before us and are cheering us on with the kind of praise to God that fully recalls his works and character. It also means we are equipped to remember and participate in the life of Jesus – both in time and through history. Eugene Peterson’s The Message paraphrase captures the fact that we only press onward as we bring to active remembrance the ministry of Jesus:

Do you see what this means—all these pioneers who blazed the way, all these veterans cheering us on? It means we’d better get on with it. Strip down, start running—and never quit! No extra spiritual fat, no parasitic sins. Keep your eyes on Jesus, who both began and finished this race we’re in. Study how he did it. Because he never lost sight of where he was headed—that exhilarating finish in and with God—he could put up with anything along the way: Cross, shame, whatever. And now he’s there, in the place of honor, right alongside God. When you find yourselves flagging in your faith, go over that story again, item by item, that long litany of hostility he plowed through. That will shoot adrenaline into your souls! (Hebrews 12:1-3)

I am imprinted deeply with the words “Never Forget!” The rallying cry references the Holocaust, but includes history’s long, horrible preamble of anti-Semitism. Some may hear in those words a sort of grudge-holding, but I hear instead the call to Jew and Gentile alike to fight our generational amnesia, which might be the real culture war in which we find ourselves. It is discouraging to see how little remembering is going on in the Evangelical world. We are trying too darn hard to settle in this culture, looking for comfort and security in ways that drain us of our ability to be kingdom people.

Remembering – really remembering – will make pilgrims of us all. This is who we’re called to be, no matter how we voted.

A bit of a Qoheleth in his own time, philospher Soren Kierkegaard, once wrote, “…faith simply means: What I am seeking is not here, and for that very reason I believe it. Faith expressly signifies the deep, strong, blessed restlessness that drives the believer so that he cannot settle down at rest in this world, and therefore the person who has settled down completely at rest has also ceased to be a believer, because a believer cannot sit still as one sits with a pilgrim’s staff in one’s hand – a believer travels forward.”

* If you’re in the market for a great name for a pet hamster, Qohelet might be just the ticket. You’re welcome.