I’ve had some pretty terrible leaders. I’ve served under leaders who were burned out, on power trips, coddling a secret life of sin and corruption. I’ve had leaders who were living illustrations of The Peter Principle, and others who got their training in the Benito Mussolini School of Management.

A good, long look in the mirror shows me the face of someone who has been a terrible leader, too. Left to my own devices, I tend to make fast, unilateral decisions – which can alternately frustate or terrify teammates. That style works well for me as a self-employed writer and communications consultant. But I need to give myself an occasional Mussolini-style speech when I am working with others, reminding myself to rein it in, listen and give others an opportunity to contribute.

Because I do lead teams or projects from time to time, I want to learn to lead better – with an asterisk. Too many Leader Culture books say the same thing, and some who drink too much of that Kool-Aid can buy the lie that manipulation plus good intentions equals leadership. I recently reviewed two very different books on the subject of leadership, and both gave me some new food for thought on the topic of what it means to lead and follow well.

Ruth Haley Barton’s Pursuing God’s Will Together: A Discernment Practice For Leadership Groups (IVP, 2012), is the kind of book that will change the way a church leadership team or not-for-profit board functions – for the better. Instead of using business principles, Roberts’ Rules Of Order and bookends of perfunctory prayer to run meetings and make decisions, Haley Barton describes an entirely different paradigm. Instead of decision-making, she suggests that these groups need to learn to discern God’s will together. Discernment requires all members on a team to commit to attend to their own individual spiritual lives, pursue spiritual community among themselves, learn to listen to God together, learn to listen to one another together, and commit, preferably in a covenanted relationship, to a process that is rooted in the character of God.

She explains why the dominant style of leadership in our culture does not translate well to church or faith-based nonprofit settings: “Gifted leaders – Christian or otherwise – can function effectively for a while on the basis of natural gifting and knowing how to maneuver in the business world. This does not necessarily qualify them for spiritual leadership. The destructive results of a lack of self-knowledge may not become evident until the person has been in leadership long enough for the public persona to fray around the edges when the pressure is on. When pushed against the wall, such leaders will capitulate to old unresolved patterns.”

As I read, I reflected on some of the teams of which I’ve been a part and tried to imagine what it would have been like to function via shared discernment instead of the ways we made decisions (by crisis, by voting, by steamrolling, by passive-agressive avoidance). Shared discernment comes at a cost of time and ego, but reeks in the most beautifully fragrant sort of way, of flourishing, abundant life together. 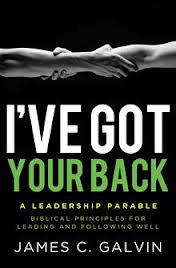 Dr. James Galvin, a seasoned organizational consultant, addresses the effects of leaders’ misspent time and ego issues in his book I’ve Got Your Back: A Leadership Parable. He contends that “follower abuse” is everywhere. (Show of hands if you agree.) Without intentional and pro-active response on the part of followers as they deal with abusive leaders, they are doomed to either repeat the pattern or abdicate, taking their gifts and growth potential with them. To that end, Galvin offers a fictitious story of the ongoing interchange between four young adults stuck in various confusing and dysfunctional work or ministry situation and an older, wiser mentor. A number of charts and graphs  sprinkled throughout the book offer quick visual support for the coaching Galvin’s mentor character, Jack, offers to mentees Brad, Randall, Lynn and Valerie.

The story portion of the book is didactic in nature; it is comprised of a series of instructional conversations. The dilemmas each young person faces is entirely believable, though the the conversations tend to be more positive and character tensions resolve more quickly than a true work of fiction would allow. This is a parable, however, meant to teach, and Galvin packs a lot of practical advice into this story about learning to follow well even when the leader is not holding up his or her end of the bargain. After he wraps up the parable portion of I’ve Got Your Back, Galvin offers up a short theology of follower-ship that is a wonderful summary of the conversation in the first two-thirds of the book. He writes, “Even with all the research and books available to us, leadership is still messed up. When managers or politicians or pastors dominate in meetings, demand their own way, treat people as objects or abuse followers, we typically call them ‘strong’ leaders. Harsh leaders would be a better descriptor. Clumsy would work…Why do we put up with it and call them ‘strong’ leaders as if what they’re doing is acceptable? As followers, our mental model of leadership must be messed up, too.”

In no way does he advocate a doormat-like acceptance of this abuse. Rather, he encourages readers to be proactive in pursuing their own growth and the good of others around and over them, which I’d say is a pretty decent leadership training program.

What is your favorite book on leadership? Why?