Being a sister wife would have been an upgrade for Hagar. But she was nothing more than an employee. A darn good employee at that. She did whatever her aging mistress, Sarai, asked of her. Right down to having intercourse with Sarai’s antique husband, Abram, at Sarai’s insistence. The old woman was determined to give her husband an heir one way or another. Abram and Sarai’s God had told the pair some pretty wild things, not the least of which was that these two, well past their freshness date, would make a baby. After a lifetime of infertility, and no quick miracle following the promise of God, Sarai applied some “God helps those who help themselves” theology to the promise and sent Hagar to her husband’s bed.

The dutiful Hagar did as her mistress asked and lay with the old man. One new moon came and went. Then another. No sign of menses meant that Hagar was pregnant with the old man’s child. As Hagar’s belly ripened, she became more and more unhappy. Her mistress would claim this child as her own. Hagar would be the slave of her own child.

No wonder Hagar’s attitude headed south. She may have once been Sarai’s “Employee Of The Week” every week, but now that she was pregnant, she’d become a sullen and decidedly unhelpful servant. Sarai complained to her husband, telling him that she’d become Hagar’s victim in the situation. Never mind that this whole arrangement was her idea.

Abram abdicated his voice in the matter to Sarai, telling her to handle Hagar in whatever way seemed best. (Note here that Abram doesn’t appear to be terribly concerned at all about how the outcome of Sarai’s decision might affect his unborn child, this clever fulfillment of God’s promise to Sarai and him.) Abram’s abdication was a green light for Sarai to pay back Hagar for all that back-talking and foot-dragging she’d been doing – as well as serving as a smack-down to Hagar’s ability to conceive, which was a sign to everyone that Sarai was the infertile one and always had been.

What happened next between the two women couldn’t have been pretty. The headlines of the relational breakdown are captured in Scripture’s sparse narrative:

Then Sarai mistreated Hagar; so she fled from her. (Gen 16:6) 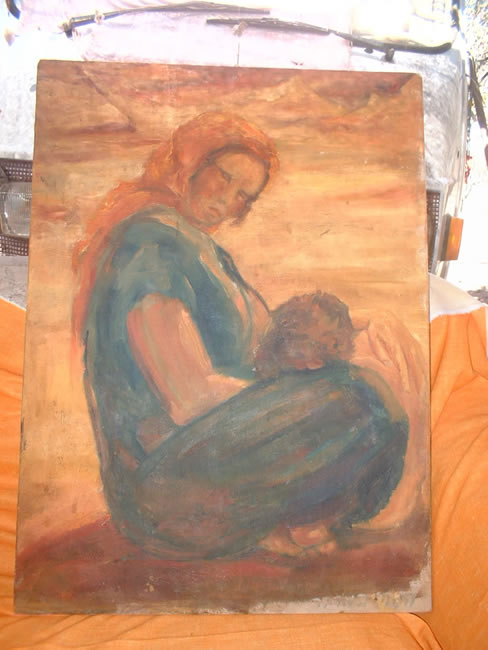 Hagar’s wilderness exile must have seemed far more hospitable to the pregnant Hagar than Chez Abram and Sarai was. Even though Abram didn’t seem to demonstrate much concern about the whereabouts of his future heir, God did. Enough so that he sent a messenger angel to Hagar. He instructed her to return to Sarai’s household, and included her in the promise given to Abram of descendants too numerous to count. He also gave her a heads’ up that this son would have, to put it mildly, an oppositional streak.

The wilderness visit changed everything for Hagar. Abram and Sarai’s God had met her in her exile, and the name by which she referred to him reflected this encounter: “You are the God who sees me”. The angel had given her a name for her baby, too: “God hears”.

As a result, she returned to Abram and Sarai’s household a pilgrim. And when the baby was born, Abram demonstrated that he’d heard Hagar, too, by giving the baby the name Sarai’s surrogate had brought back with her from her exile.

Hagar’s story is my story, too. I’ve been driven into places of exile by the choices of those I perceive are abusing their positions of power. Long ago, I discovered I stink at organizational politics, another way to say that I don’t know what to do with the strife and chaos of relationships characterized by a lopsided balance of power in a workplace or organization. I’ve fled emotionally (and sometimes physically) into exile, preferring wilderness to gamesmanship by authority figures. The wilderness silences the din and lies of those abusive voices.

Exile has sometimes been the only place I can hear the truth. God sees me. God hears me. God knows me. That truth transforms exile into something else entirely, and empowers me to put one foot in front of another. Sometimes, like Hagar, I must head back to the places, people and circumstances that drove me away. But Hagar’s story reminds me that I do not travel as an exile, but as a pilgrim who never journeys alone.

Have you ever been driven from a relationship, job or organization by someone else’s agenda? Have you ever had to return to the situation? What made the experience most challenging for you?