I am journeying through Scripture chronologically in order to explore the themes of exile experience. I’ll also offer some helpful thoughts about how Christ can reshape that identity and reorient our journey so we live as pilgrims. To read earlier posts in the series, go to the “Blog Categories” pull-down menu in the right column of this screen and click on “Pilgrim’s Road Trip”.

OK. I admit it. In my early Genesis focus on exiles, I almost zipped past the very first example of a pilgrim. My bad.

Noah became the charter pilgrim when he first said no to what all the other kids in the neighborhood were doing. Scripture doesn’t record that no, but captures the effect of that and every subsequent no from Noah in these words:

The Lord saw how great the wickedness of the human race had become on the earth, and that every inclination of the thoughts of the human heart was only evil all the time. The Lord regretted that he had made human beings on the earth, and his heart was deeply troubled. So the Lord said, “I will wipe from the face of the earth the human race I have created—and with them the animals, the birds and the creatures that move along the ground—for I regret that I have made them. But Noah found favor in the eyes of the Lord. – Genesis. 6:5-8 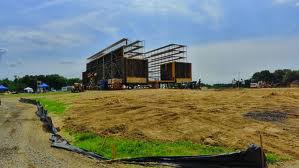 Noah’s life of no was a yes to God.  The infinitely patient God could no longer brook the in his face disregard of both himself and the gifts he’d given to people who’d decided to live as if he was watching, impotently, from a distance. Out of just love, he chose to create a do-over, determining to sweep away most everything he himself had created from Day 3 onward, salvaging a man and his kin who’d maintained the sort of fellowship he’d had with Adam and Eve once upon a time in Eden.  This wiping of the slate would leave one group of people carrying the DNA of Adam and Eve – and seeds and roots of food-giving plant life, plus pairs of every creature who’d filled the earth with chirps, roars and hisses – to fill the earth and enjoy relationship with God once again. It could never be the purity of Eden unmarred by sin, but the flood promised a place made by God for flourishing and fellowship.

When God told Noah of his plans to destroy the world, he invited Noah to participate in the salvation he was offering to Noah, his family and pairs of each creature by giving him an unusual set of instructions. This was an unprecedented message. Noah had no context or experience for any of it. And yet…

By faith, Noah built a ship in the middle of dry land. He was warned about something he couldn’t see, and acted on what he was told. The result? His family was saved. His act of faith drew a sharp line between the evil of the unbelieving world and the rightness of the believing world. As a result, Noah became intimate with God.   –Hebrews 11:7 (The Message)

No one knows exactly how long it took Noah to build this massive boat. Scholarly guesstimates range from 20 years to 120 years. Noah was already a veteran in the art of saying no to those around him. After his sobering encounter with the Living God, he shifted from being Mr. Goodie Two-Sandals, the town exile, to become a righteousness-preaching whack job building an ocean liner miles from a body of water.

I believe he became a pilgrim the moment he picked up his hammer.

When I was in high school, I first learned the difference between being an exile and being a pilgrim. After I came to faith in Christ, I would throw my Bible from my second-story bedroom into the bushes below, then run out the door, telling my parents I was going out with my friends. I’d snag my Bible from the bushes, jump in the car, and sneak to church. My folks forbade me from attending church; my newfound faith made me an exile from my own family. Though I was engaging in a bit of teen subterfuge, the act of launching that Bible out the window marked my difficult home life experience as something other than exile. I wanted to follow God. I was a pilgrim.

Noah picked up a hammer. I threw a Bible out the window. Have you ever done something that marked or declared your allegiance to God in a tangible way? What was the result in your life?