I hope to journey through Scripture chronologically in the coming year, exploring the themes of our identity and experience as exiles. I’ll also offer some helpful thoughts about how Christ can reshape that identity and reorient our journey so we live as pilgrims. J.R.R. Tolkien once wrote, “Not all who wander are lost”. Pilgrims wander with a purpose, an internal homing device that pulls them Homeward. Every exile account in the Bible contains an invitation to pilgrimage, for those with hearing eyes and seeing ears. 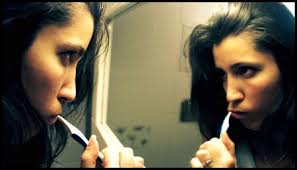 You roll out of bed, not quite rested but shoved into another day by an insistent alarm clock. You trudge to the bathroom, brush your teeth, get dressed, jump in your car and swing through the Starbucks drive-through for a grande jolt of wake up juice before you head to another day of work.

So many of the ordinary bits and rhythms of our lives are shaped by the effects of our exile from Eden. Our weariness may be birthed in broken bodies, divided hearts and/or souls out of communion with God. We wear clothing, something not necessary in the perfect climate and moral purity of the Garden. Even that every-morning date with a toothbrush and a squeeze of Crest is an acknowledgement of the decay that entered the world via Adam and Eve’s “let’s try it our way” disregard to the single rule God had given Adam.

That disregard – sin – tore a hole in our relationship with our Creator. Our life as exiles, as people banished from  began the moment “let’s try it our way” bubbled up in the hearts of the created ones. Darkness can not exist in the light. Sin can not exist in the presence of the Holy.

Here are the first two lines in the story of our exile experience:

So the Lord God banished him from the Garden of Eden to work the ground from which he had been taken. After he drove the man out, he placed on the east side of the Garden of Eden cherubim and a flaming sword flashing back and forth to guard the way to the tree of life. – Gen. 3:23-24

The actions of God in response to his creation’s fall are described with intense verbs like “banished” and “drove”. Those words are the equivalent of a firmly closed door, bolted from within. Cherubim were called into a role as bouncers. That mysterious image of a sword on fire, a weapon of war in a place that had known only pure peace, serves as an additional protection for a tree whose fruit would be given to those free from death, alive in eternity – pilgrims whose faith and obedience defined their relationship with God.

As he sent Adam and Eve into exile, God promised redemption and offered protection. But toil, pain, relational struggle, sin and death went with them as well, marking them and their descendants as refugees from Eden. Consider the ways in which your everyday life is not at all like the perfect paradise of that Garden. Take a few moments to list the markers of your existence as an exile by naming the broken things in your world, the brokenness in you.

The sorrow or anger that you may have felt as you named those broken things? The sinking recognition that things aren’t the way they’re supposed to be?

Those are marks of the exile experience, but they also contain a clue, a compass of sorts. Deep in our DNA,  beyond rational thought or extravagant imagination, is a longing for home. Adam and Eve had it or it wouldn’t have taken sword and cherubim to protect Eden. We have it, too. This longing contains our invitation into the new identity and life direction God longs to give to his beloved exiles. This longing is designed to transform us into pilgrims.

Which word resonates with your life experience more: exile or pilgrim? Why do you say so?