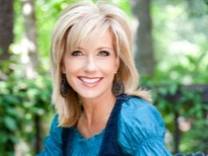 Beth Moore, you surprised me.

When I worked at a seminary bookstore, various women’s ministry leaders from the local church community would call or come in to order curriculum for their study groups. It seemed as though about 90% of them ordered Beth Moore’s materials. The Moore-orderers tended to be older, conservative women from churches that sponsored women’s events titled with words like “tea”, “spa”, “scrapbook” and “chocolate” (sometimes in especially-trying-too-hard combinations like “chocolate spa”).

I’d benefitted from my years using Kay Arthur’s study materials, though I’d gagged on some of her “Oh Beloved” gush in her address of her readers. My throat would have closed up entirely from that honey-sweet talk if Arthur’s bracing line-upon-line inductive study hadn’t diluted that sugar considerably. I’d done my time marching drills in women’s Bible study land with General Kay. My initial assessment of Beth Moore’s study materials was that they seemed a little lightweight somehow. In my mind, Moore’s Southern cheerleader persona escalated the “sister-girlfriend” sugary spoken intimacy level to diabetic-inducing levels. Case closed.

Instead, for many years, I flew solo, reading theology, and practiced consistent daily devotional time in Scripture. I did try one year of women’s Bible study at our church, but it was a lot of “What jumped out at you from this passage of Scripture?” and “The notes in my Study Bible say…” I kind of figured I was done with women’s Bible studies, since, except for the Precepts studies, most of the ones I’d attended over the years tended to be heavy on reader-response and light on meaningful content. When we moved this past summer, God prompted me to reconnect with a bright, creative, seminary-educated friend who was running the women’s ministry program at a church here in our new town. She described the slate of offerings at her church, and lobbied me to join the study group she facilitated. I’ll give it a try, I said gamely. Then she dropped the Beth Moore bomb on me.

“We usually do a Beth Moore study in that group in the fall, Over the winter and in the spring, I’ll write curriculum or we’ll study a book together.”She must have seen the look of undisguised dismay on my face. “It’ll be the book of James,” she added.

James is my favorite epistle, and I’d had a great experience doing a Precepts study of the book a few years ago, so I put my game face on and figured I could coast on my past James study experience through the fall.  If it is too excruciating or silly, I reasoned, I’ll just bow out.

My assumptions about myself were wrong. First of all, why would God allow me to coast on my a serious study I’d done 10+ years ago when his Word is living, active and razor-sharp every single day? It didn’t take long before I had to admit that I had a lot of pride at play: I was too…what? smart? sophisticated?…to get anything out of the kind of study loved by members of the Scrapbooking Brigade. It’s a little embarrassing to admit the arrogant way my head works sometimes, but according to James, confession is my only hope for a cure: “Therefore confess your sins to each other and pray for each other so that you may be healed.” (James 5:16) So there you have it. Sometimes, I am a prideful doofus.

I was also wrong about the content of Moore’s study. Yes, there was the overwrought emotionalism I dreaded on both video and in the workbook, particularly during the final week of the study. (Her long, anguished goodbye during that week’s material left me feeling like I’d eaten a half-jar of caramel sauce for breakfast.) There were moments when it was all a little too much about Beth, her family and her life –  and not quite enough about Ya’acov (James’ Hebrew name).

And that sentence captures what I came to admire about Moore. Most of the study had solid content of the kind that should be (but usually isn’t) the baseline for the way we in the Church learn, speak and pray. Specifically, she placed James in his proper Hebrew context in ways I’ve rarely heard from a church pulpit. She dug into the original languages. She sought the input of scholars. She read history. She did her homework. She prayed. She used that emotional intensity of hers to place herself under the scalpel of the Word for the benefit of many others. She avoided prooftexting, and refused to go down the reader-response “What do you think this verse means?” road. The study surprised me, challenged me, and, I hope it’s changed me.

Her material doesn’t necessarily equip people to dig into the Word for themselves in quite the same way she does, one contrast I noted from my years doing Kay Arthur’s inductive studies. Not that people couldn’t do the work of serious study Moore does (they can!), but her material is extremely teacher-dependent. I wonder if she’s ever considered putting together a “this is how I do it, and how you can do it yourself” teaching. It would be a wonderful, eternal gift to her students.

I came away from the study with a new-found respect for Moore. She loves the Word of God and its Author. Is there a higher compliment than that?

So, I admit it. I was wrong about you, Beth Moore.