Twenty years ago, author Anne Lamott was ambushed by her unexpected pregnancy. Her best selling 1993 memoir, Operating Instructions, describes her tumultuous first year as a single mother after her son Sam’s birth.

When Sam turned 19, he told his mom that he and girlfriend Amy were about to become parents, a life-altering event for the young couple.  The news did some serious upending of Anne Lamott’s life as well. Anne and Sam together agree to tell the story of the growing up that all three generations of Lamotts did during baby Jax’s first year. 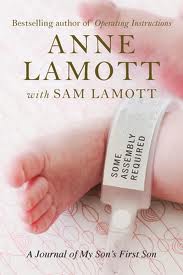 As Anne Lamott notes in the book, Some Assembly Required: A Journal Of My Son’s First Son, “…I’d always looked forward with enthusiasm to becoming a grandmother someday, in, say, ten years from now, perhaps after he had graduated from the art academy he attends in San Francisco and settled down into a career, and when I was old enough to be a grandmother.”

Because I, too, didn’t feel I was quite “old enough” to be a grandmother when I became one at age 44, Some Assembly Required was on my very short, Drop-Everything-And-Read list (vs. my less urgent To Be Read list.). My full review of Lamott’s book is included in the most recent issue of the print edition of The Englewood Review of Books.

Not long ago, I had an opportunity to have a different sort of conversation about Some Assembly Required with fellow Her.meneutics contributor Jennifer Grant, mother of four children between 10 and 16, and author of Momumental: Adventures In The Messy Art of Raising A Family (Worthy, 2012). I offered a brief review of Grant’s book here.

Who doesn’t love eavesdropping? Take a few moments to listen in as Grant and I chat about Some Assembly Required and a few of the lessons our own children and grandchildren are teaching us:

Michelle: I was struck by Sam and Amy’s push-pull toward independence throughout the book. The two of them were trying to establish themselves as independent young adults, but Jax’s birth also meant that the young parents and their son needed additional care and support from their families.

Jennifer: The book underscores the fact that families come in many different configurations. When Anne learns that she’s going to be a grandmother, she knows the young parents will need her help. She’s frightened for them and knows neither Amy nor Sam are yet fully mature adults. Given the intimate relationship she has with Sam, however, she is an integral part of the new family that is formed after Jax is born.
She admits that she wants to control Sam and Amy and even confesses to wanting to steal the baby and run away sometimes. But we see in the book that one of her strengths as a mom is the way she respects her son.

Michelle: I think Jax may experience Anne’s gift of listening in a way that Sam never could. When we’re parents, we often speak in imperatives to our kids: “Get ready for school,” “Clean your room.” As a grandparent, I am not weighted by that same kind of responsibility. Even though I would tell myself to stop and savor regularly the passing moments of my kids’ childhoods, the daily grind was frequently at odds with that desire. I now have the space to listen, notice, and savor, which Anne appears to practice.

Anne faces the sometimes-painful reality that she was not part of that triad of new mother, new father, and new baby. We see her stifle her urges to offer sage advice when none was asked of her, a painful lesson many new grandparents must learn.

Jennifer: I can’t think of any other book that does what this one does in giving expression to the imperfect, but deeply connected, relationships parents and grandparents forge in non-traditional situations. It could affirm the experience of so many families who don’t look like that iconic Norman Rockwell scene of the Thanksgiving table. Which is, you know, most of us.

Lamott learns to loosen her grip on her son’s life, writing that becoming a grandmother makes you grow up. Parenting does force us to grow up – and no one I know has done so completely willingly. It’s hard.

As much as Anne expresses her anxiety, fear, and neuroses, she hangs onto the fact that God loves her son and grandson and can transform what began as a very tricky situation into something beautiful. And, all along, she lets Sam grow. She lets go.

Michelle: Being involved appropriately in my young adult children’s lives means they have the privilege of telling me what they need from me. I no longer must anticipate their needs. They have to figure it out, and it can be really difficult to step back and let them do it.
We also see Anne’s eclectic approach to faith has been passed on to Sam. He has permission to keep asking questions, just as she keeps asking questions.

Jennifer: She models for us all what it is to “own” our experience – all of it.  Even if it’s tricky or messy at times to be a parent or to be a person of faith. She writes with such transparency about those big issues. And you see how her relationship with Christ has been a model for Sam. He’s ever on the lookout for signs of God’s presence in his own life.