We’ve turned a story of a flesh-and-blood man standing apart from his own decaying culture into a nursery decoration. 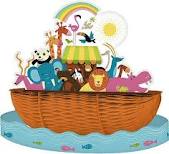 Brian Godawa has torn the cutesy pastel version of the Noah story off of the nursery wall in an attempt to help modern-day readers remember that Noah and his family were three dimensional people struggling to live counter-cultural, obedient lives in the years leading up to the flood. Noah Primeval: Chronicles of the Nephiliim (Embedded Pictures Publishing, 2011) is definitely not your Sunday School teacher’s Noah story.

Godawa, a respected screenwriter and author, pondered the inciting events described in Genesis 6:1-4 that led to God’s decision to flood the world he’d created. Who were these characters and what was the nature of the evil that existed on the earth? I’ve never heard a sermon about Nephiliim or the mysterious Sons of God who hooked up with human women, have you?

(Noah) walked upright and kept separate from the pollution of the city gods who came from heaven and sought to mix their blood with humanity. Noah’s tribe and the other human tribes of the West refused to worship these pretenders to the throne of Elohim, and refused to participate in their corrupting sorceries.

But this was not enough for Noah. Though he knew Elohim was Lord of creation, he sometimes felt that there was little difference between the servitude Elohim expected and the servitude that the city gods demanded of their subjects. A god was a god after all, and in either case man was a servant.

Noah did not like being a servant. He yearned for freedom in his breast.

Freedom for Noah came at a very high cost. Nephilim assassins – half-man, half-god – were sent by the ruling god and goddess of the land to consolidate their power and kill the Chosen One, Noah, to foil the revelation of the one true God. The rotting culture and the supernatural characters and practices of these gods and their “associates” scattered Noah’s family and forced him to action.

Godawa really knows how to tell a story! The epic nature of Noah’s journey hints at Tolkien’s Lord Of The Rings without being derivative. I could not stop clicking through the 268 pages of Noah Primeval (I read the Kindle version, which is my favorite way to read fiction), and I am not even a fan the speculative fiction/fantasy genre.

Even though Bible readers already know how Noah’s story goes, I’d guess that few of us have ever spent much time imagining his life “pre-ark”. Godawa’s narrative shattered my own un-considered illustion that Noah and his family were living in some isolated valley building the ark for 120 years before the rain started falling and falling and falling. Though I enjoyed the story, the non-fiction reader in me especially appreciated the nearly 100 pages of appendices at the end of the book. He includes extremely well-researched discussions providing an overview on current academic thinking about the Sons of God, Nephiliim, Leviathan, and Mesopotamian Cosmic Geography in the Bible. (The latter is just about worth the price of the whole book, in my opinion.) These appendices helped me think through the truths in the fiction I’d just finished reading.

If you’re a spec fiction/fantasy fan, I’d definitely recommend Noah Primeval to you. And if you’re not, you may just want to add this to your reading list anyway.

*I received a review copy of this book from the author.