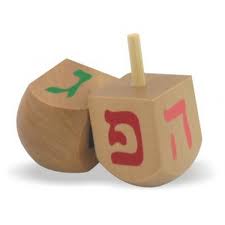 When I was a kid, Chanukah meant eight nights of presents, wrapped in shiny blue and silver paper. It meant treats of Chanukah gelt, foil-wrapped waxy coins of chocolate, and playing the dreidel game while each night’s candles burned. The game featured a four-sided top with Hebrew letters on each side that were meant to remind us of the “reason for our season”.

I was told the reason for these December festivities was to celebrate the miraculous story of brave Judah Maccabee, who hid out in the rugged Judean hills with his band of brothers in a revolt against the oppressive Greek ruler Antiochus in 167 B.C.  Antiochus was bent on stripping the Jews of their identity, and turned the temple in Jerusalem into an altar to Zeus. When Judah and company vanquished their enemy’s army, one of their first tasks was to sanctify and rededicate the temple and themselves to God. The Hebrew word for dedication is Chanukah.

The rededication process came to a halt when the priests realized that they did not have enough oil to fuel the temple’s menorah (7-branched candelabrum). They were so full of joy to be in the holy place that they lit the menorah anyway. As if to underscore the great miracles that had already taken place, God caused that tiny amount of oil to burn for 8 nights until more oil could be prepared. The unquenchable light was a visible proclamation of who the God of Israel was, and a reminder of who his children were called to be – the light to the nations.

After I came to faith in Jesus as Messiah, I realized that he who’d healed the sick, walked on water, and been raised from the dead was the only-begotten Son of the one true God responsible for the miracles of Chanukah. The story of the holiday became a part of our family’s story. Each year, my husband and I lit our chanukiah (the nine-branched candelabrum used to celebrate Chanukah), prayed the prayers of thanksgiving and dedication I’d learned as a girl, and told the story of the Chanukah miracles to our children.

We wanted them to know Chanukah was an important role in setting the state for that other December holiday – Christmas. When Joseph and Mary took their Baby to the Temple to present him to the Lord as the Law prescribed (Luke 2:22-24), they were able to do so because of the miraculous events that had occurred in Jerusalem more than a century earlier.

Likely he was moving toward the end of his years of earthly ministry when Scripture places Jesus in the temple at Chanukah: “Then came the Festival of Dedication at Jerusalem. It was winter, and Jesus was in the temple courts walking in Solomon’s Colonnade.” (John 10:22-23) Our Jewish Savior was present with his people and celebrating a holiday not prescribed or described in the Hebrew Scriptures. Chanukah at that time was a new and minor holiday in the Jewish year.

Our children are grown and on their own now, but my husband and I will kindle the candles on our chanukiah this year, just as I have done for over five decades. The simple blessing prayed as the candles are lit acknowledges God’s holy rule over all of his creation, thanks him for the miracles he did for our ancestors “in those days at this time”, and prayed only on the first night of the holiday, an offering of gratitude to him for sustaining and preserving us as a people.

As I watch the 1-2-3-4-5-6-7-8 small flames dance in the shadows of winter’s early sunsets, I remember the One who’d told his disciples: “I am the light of the world. Whoever follows me will never walk in darkness, but will have the light of life.” (John 8:12)

And I will add my prayers for the people I know who walk in darkness, that they will see and follow the Light of the world – Jesus. Chanukah is all about God’s miracles, after all.

This devotional originally appeared in the December 2011 Caspari Center newsletter.