When we first met Carlos 9 years ago, he was working as a busser in a Mexican restaurant. He didn’t have papers, but he did have our daughter’s heart. The two married, and after a couple of years, they began the long process of getting Carlos a green card, and then applying for U.S. citizenship.

Today, Carlos completed that journey. He is now an American citizen. 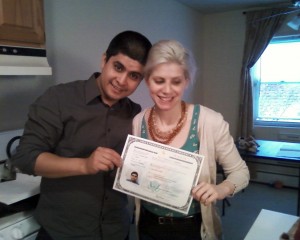 In my second book (Uprooted: Growing a parable life from the inside out), I penned a narrative using elements of Carlos’ experience as an illustration of the parable of the mustard seed, describing nearly-imperceptible-to-the-human-eye growth. At the time I was writing the book, Rachel and Carlos were living in El Paso, filling out government paperwork and waiting and waiting and waiting some more as they worked through immigration issues.

Their 7 year saga is reality for countless others who are living in the shadows in our country, hoping for a better life. There will be other days to discuss the injustice of our current immigration system. But today is a day to celebrate the perseverance of Rachel and Carlos during the long, hard journey to this day.

The story in the book is called Javier The Invisible. The essence of it is Carlos’ story – and it is my hope that as you read it, God will help you see the invisible people in your world – and then, perhaps to act.

Because they are there, all around you, in the shadows.

The bells pealed at the hour, every hour of the day. The big old church covered a whole block, right across the street from Javier’s apartment. The sound of the bells cut through the noise and rumble of busses and ambulances and the constant flow of city traffic, their clear music calling the faithful and the foolish alike to prayer.

He’d lived the last few years of his life trying his best not to be seen. He’d paid a coyote (smuggler) a few hundred dollars, squeezed out of his poverty, to help him and a handful of others sneak across the U.S.-Mexico border one night. They’d run across the battered landscape under cover of darkness, trying to stay invisible.

He’d been trying to stay invisible ever since.

Being invisible had its advantages. The English he learned in his central Mexican school felt woefully inadequate in this country where everyone spoke in rapid, slang-filled shorthand. He’d learned to be invisible first from his mother, who was unable to care for him after her boyfriend, his father, took off. He learned then to blend into his grandparents’ family as they raised him throughout most of his childhood.

Those lessons served him well. He was good at being invisible. Here, in the U.S., living and working in the shadows meant he needed to remain invisible. He quietly fought waves of homesickness – missing the embraces of his abeula (grandmother), the stories his abuelo (grandfather) told him after he came home from his third-shift factory job and the daily drama of life in a large family. When he thought of home, though, he also thought remembered rusting metal, rice and beans, poverty that felt like a picked-clean carcass baking in the desert sun. Javier swallowed the ache for his family and forced himself to look ahead to a better, more prosperous life.

Some of Javier’s cousins had come to the U.S. to work a few years earlier. This was the only way out, they told him. When they called home, they told him they could hook him up, too, get him a fake I.D. and help him find employment where they didn’t ask him too many questions. They cautioned him: “Si vienes, tienes que aprender a ser invisible. (If you come, you have to learn to be invisible).”

He made his way north, trying to blend into the background. He was like countless other illegal immigrants who’d made this journey before him. He bounced from one city to another, living with cousins and acquaintances, sometimes moving on because of the fighting and drinking that went on in the crowded apartments, other times moving on in his search for a better job.

In Milwaukee, he had a job in a factory, then in a Mexican restaurant. He met a beautiful young American citizen, and before either of them had time to catch their breath, a baby was on the way. The couple married.

Now there were three of them trying to be invisible.

The T.V. was on in the nearly-empty apartment almost all the time. It provided background noise, keeping both he and his son company during the long afternoons and evenings that his wife was at work. After he and his wife had applied for a green card for Javier, trying to right his illegal status, they knew he’d have to stop using his fake ID’s to work. If he was caught, he wouldn’t be able to return legally to the U.S. for at least 10 years. The stakes were too high now.

He swallowed hard and chose a new, more difficult kind of invisibility as a stay-at-home dad while they waited for his paperwork to wind its way through the system. He wanted to work more than anything, to build things, repair things. He was a hard worker. He wanted to come home tired at the end of a hard day and scoop his wife into his arms, and throw his little son into the air to hear him laugh. The waiting turned out to be harder work than any job he’d ever had before.

The boredom played with his mind. The self-accusation that said “Tu eres inútil” (You are useless). Though his life was  somewhat more comfortable in terms of finances than it had been in Mexico, it was a harder life than he’d ever dreamed for himself. Being alone with a toddler and TV for hours and hours each day wore at him. He could watch only so much soccer and see the same commercials over and over, trying to sell him things he couldn’t afford and didn’t need. He’d signed up for being invisible, but didn’t count on the darkness that was trying to pull him under, telling him his destiny was permanent invisibility.

His life had been a mezcla, a mixture of spiritual experiences and influences. The formal religion of his childhood introduced him to a God of form and ritual. His family wasn’t any more or less religious than anyone else they knew in their central Mexican city. It was a part of life, just like playing soccer and bar fights. His nights were periodically punctuated with the terrifying dreams of darkness and death that told him that he was not entirely invisible. The dreams left him feeling small and undefended.

He wanted, simply, to be held in the arms of a perfect Father, one that would never abandon Him. One that would rescue him from the terrors that found him in his dreams.  “Estimado Jesús, yo he tratado a vivir mi vida como si Usted no me mirara. He hecho muchas cosas equivocadas, y yo soy distante de Usted. Ayúdeme por favor…” (Dear Jesus, I have tried to live my life as if You weren’t watching me. I have done many wrong things, and I am far from You. Please help me…)  And then, he added the deepest prayer of his heart – a wordless prayer formed from his emotions directed Godward: Yo no quiero ser invisible ya. (I don’t want to be invisible anymore.)

The prayer rooted itself in him, even though his circumstances remained unchanged. But he had time to pray:  “¿Dios, usted me ve aquí?  (God, do You see me here?)”  Each day bled into the next…soccer, game shows, Dora The Explorer, truck commercials…diapers, toys, babble, naps...las campanas – the church bells, ringing every hour, marking the slow passing of time crawling past the little family.

You might think that Javier’s walk across the street was the act of a man bored with watching soccer. You might decide he was just another immigrant, looking for a bit of comfort in religion. You might even think that he might have been looking for a handout.

If you noticed at all.