Kathryn* would have never been ambushed by Clinton and Stacey for an episode of What Not To Wear. Her always-coordinated  outfits always had a bit of a Talbot’s catalog vibe to them; her shoulder-length hair was curled, sprayed and nearly pageant-ready every single day. She had the kind of ultra-femme demeanor – a little girl voice plus a helpless and reverential manner – that brought out unusual levels of latent chivalry in many of the men around her.

If the women of the church we both attended were an all-ages sorority, Kathryn would have been the president and the head of the rush committee.

And she knew it.

Kathryn frequently let the other women of the church know that her blessed life (doting husband, two overachieving kids, a beautifully-decorated home) was a direct result of her commitment to following God’s rules. She told the other women who looked to her for counsel that if they just colored inside the Christian lines they were guaranteed to have a wonderful life just like hers. “Christian” was one of Kathryn’s favorite adjectives. Christian friends. Christian entertainment. Christian toilet bowl cleaner. (OK, I made that one up.)

You can probably spot several problems here. Kathryn used her power to advance her own unhealthy, works-oriented theology. There was no space in her soul for those who were suffering, addicted or broken, nor was there any mercy for the growing pains of others. “Christian” is neither a synonym for G-rated nor a meaningful, accurate adjective.

A bigger problem was that we didn’t belong to a sorority. Or a garden club.

We belonged to a church.

The biggest problem of all was that the leaders (men and women alike) in our congregation upheld Kathryn’s version of “Biblically-correct womanhood” as the gold standard for the rest of us.

In my heart of hearts, I will always hold onto the truth that the true church breathes the oxygen of the kingdom, which means that our silly, stratified social rules and roles should not apply. Love wins at church, and the people who schlep themselves in the door in search of community get to be authentic, sometimes messy, and all the time learning what it means to be set free by God’s forgiveness. A Positive, Encouraging version of a Mean Girl is still…well…a mean girl. She is holding out her self-determined social standard as the norm for kingdom life, and sucking all of the oxygen out of the room in the process. 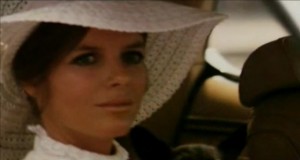 Writer and researcher Ed Stetzer wrote about this yesterday on his blog in a post referencing the recent movie The Help. Even if you haven’t read the book or seen the movie, his words may resonate with you if you’ve ever gone to church with, as Stetser’s wife calls `em, a Stepford Wife like Kathryn:

They have taken the forms and structures of a particular American religious sub-culture and elevated them to the level of what it means to be a follower of Christ. Is it really biblical discipleship to look down on those who do not adopt our same forms and cultural values wrapped in religious language?

Gospel-centered values must not be confused with the values held by Hilly Holbrook and her spiritual kin who look with scorn upon those who don’t line up with their cultural religion–a religion that kills as thoroughly and completely as that of the Pharisees.

I teach my daughters what the Bible says about men and women. I also teach them to watch out for people who teach Biblical womanhood by looking at others with elitism, judgment, and scorn. That’s a cultural religion and it kills. I’ve seen its result (up close) in people who have been told that their gifts did not matter if they could not set the right table setting– and it’s wrong.

Stetser’s words may rattle a few locked cages in his Southern Baptist tribe, but I appreciated the whole post. In fact, I would only change a single word. His last line reads, “A woman’s place is following Jesus.”

I’d change it to read, “Every person’s place is following Jesus”, because the Kathryns of this world are not created and celebrated  in a womens’-only vacuum.

If you have a few moments, read Ed Stetser’s piece, and then please weigh in. Have you ever gone to church with someone like Kathryn? (Have you ever been Kathryn??) Do his words encourage you or do they seem theologically dangerous?

*not her real name