“My husband reads your blog, and he commented that you seem to have a lot of complaints about the Church,” a friend told me recently.
A number of responses came to mind, mostly of the “Well, yeah” and “No duh” variety.
There are lot of voices offering criticism of the church around the blogosphere. A sizable percentage of these critics sing the laments that jilted lovers do. Their minor key songs are the kinds of songs sung by those who gave time and money and the best parts of themselves to a congregation, only to be neglected, used or abused in return. I would definitely put myself in this category. When I tell sad stories or ask questions about church, I am doing so because I want to use my voice to encourage others who’ve been hurt by the people who are meant to be your family in the best, healthiest sense of the word. I use my voice because there is nothing more affirming and empowering than discovering that you’re not the only one.
That said, every once in a while it’s good to tell a different kind of story about a church leader. I am still a part of the body of Christ, which means that either I’m completely nuts for sticking around after some of the horrors I’ve experienced in the Church – or I have learned that those people are not the sum and total of who the Bride is meant to be.
So with that, a good leader story. I first wrote about it in more detail here, but it is a story worth repeating. It is a beautiful picture of how a leader’s response to a messy person can bring incredible healing. It remains one of the most transcendent moments I’ve ever had in a church.
I’d been, as they say, thrown under the bus several years earlier by a leader with a secret to protect. (The secret was that he was a porn addict and was thisclose to having an affair.) It was devastating at the time, but by this point, I figured I’d worked through the worst of it and I was now all right. Really. Fine, thanks. 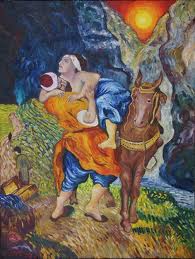 I was at an organizational meeting in a new church in a new state years later when I saw a face, an image that transported me back in time to the point of impact. A PTSD microburst. I freaked out inside, but did my darndest to maintain a calm, rational exterior.
I nearly pulled it off, except for the fact that I’d begun shaking uncontrollably. I prayed that no one noticed, and tried to figure out how to excuse myself from this room of near-strangers so I could go to my car and cry.
A leader at the church, Mike, noticed. He gently asked me if I was OK. I tried offering a brief explanation that would have allowed me to preserve a scrap of dignity, but I’m not sure I made any sense. My chattering teeth didn’t help the effect.
Mike quietly directed the others in the room to gather around me, lay their hands on my shaking body, and pray. He’d been a grade school teacher for years, and he knew just what to do when someone got hurt at recess.
None of them knew what they were praying about for me. But the Holy Spirit knew, and he moved them to pray prayers of freedom and release that hit their mark. They could have branded me an emotionally-disturbed woman, and they’d have been right.
Instead, fueled by compassion and directed by Mike’s shepherd leadership, they didn’t label me with any other label – except that of a friend in need of prayer.
This is how a leader who is following Christ is supposed to respond to someone else’s mess. In fact, this is how each one of us who has been filled with the Holy Spirit is invited to respond. Think Good Samaritan.
Mike did that night. And I am grateful.
Sharing is caring!