Yesterday while I was playing hooky, I headed to WI for a quick visit with Meg, my long-time prayer partner. We ended our day in the empty sanctuary of her Pewaukee church. It is a small modern space, but was sited onto the land with great respect to the old trees and plantings already residing on the land. Windows behind the altar bring breathtaking views of creation into the building all four seasons of the year.

As Meg and I prayed, I could almost hear a sermon preached to me by the plants and trees in full bloom. Their early summer majesty whispered to me that they are helpless to grow themselves; sun, wind, soil, rain and time are given them by the One who hard-wired the DNA within each one’s seed. Dr. Gerald May noted, “The gentlest form of spiritual narcissism is the idea that one can accomplish one’s own spiritual growth.”
Jesus told a story about the nature and purpose of spiritual growth. In my book Uprooted: Growing A Parable Life From The Inside Out, I spent a little time imagining Jesus’ revolutionary idea that God alone causes growth to happen in our lives. Enjoy!
He also said, “This is what the kingdom of God is like. A man scatters seed on the ground. Night and day, whether he sleeps or gets up, the seed sprouts and grows, though he does not know how. All by itself the soil produces grain—first the stalk, then the head, then the full kernel in the head. As soon as the grain is ripe, he puts the sickle to it, because the harvest has come.”    -Mark 4:26-29

Levi groaned. The first rays of the sun slanted through the open doorway, and he rolled over, draping his arm across his eyes. Ah, for just a few more minutes of sleep.     Miriam’s side of the bed was already cold. She was a good woman, that one, up before the dawn to begin preparing breakfast for the family.     He let his arm drop, and pushed himself up to a sitting position. As his feet hit the floor, he uttered the day’s first prayer:  I give thanks before you, King, living and eternal, for you have returned within me my soul with compassion, abundant is Your faithfulness. Amen.    He’d built his life using the pattern given him by his father, may he rest in peace, and from his grandfather before him. Levi’s family was comprised of an unbroken chain of rabbis, honorable men who’d taught others how to live every jot and tittle of the Torah.     He lifted the tefillin, those small boxes containing portions of God’s Word, one for his head and one for his hand, and began wrapping the leather strapping to himself in the prescribed manner. Left hand first, Levi prayed: Blessed are you, Lord, our God, King of the universe, Who has sanctified us with His commandments and has commanded us to put on tefillin. Amen. Up the arm, 7 times around, Levi pulled the straps snugly: Blessed is the Name of His glorious kingdom for ever and ever. Amen. He affixed the other precious little box to his head, and continued, Blessed are you, Lord, our God, King of the universe, Who has sanctified us with His commandments and has commanded us regarding the commandment of tefillin. Amen.    He paused for a respectful moment, then repeated the statement that completed this part of the ritual. He’d said it by rote every day of his life since the day he became a man: I will betroth you to Me forever, and I will betroth you to Me with righteousness, justice, kindness, and mercy. I will betroth you to Me with faithfulness, and you shall know Me, God.     He dropped his prayer shawl over his head like a small tent and raised his hands: Blessed are You, Lord, our God, King of the universe, Who has sanctified us with His commandments, and commanded us regarding the commandment of fringes. Amen. Those carefully knotted fringes were combination amulet and billboard, a reminder of God’s 613 rules at the foundation of Levi’s life.    Levi completed his morning prayers, removed his tefillin, and went to join his wife and children for breakfast. He stopped to wash his hands: Blessed are You O Lord our God, King of the universe, Who has made us holy through His commandments, and has commanded us concerning washing hands. Amen. He then prayed a blessing on the warm flatbread (“Blessed are You, Eternal our God, Ruler of the Universe, who brings forth bread from the earth. Amen.”) and figs (“Blessed are You, Eternal our God, Ruler of the Universe, Creator of the fruit of the tree. Amen.”).     Each moment of Levi’s day was shaped as much by those rules as by the centuries of commentary about the specifics about how to best obey those rules. His life was a chain of days; the links forged of iron obedience.     The latest debate among the men at his synagogue centered on how best to thank the Creator for two pieces of fruit when one piece was cut into pieces and the other was served whole. Give thanks for the whole piece, of course, Levi contended. But others felt that thanking God for the cut pieces was in order since those were the ones that were going to be eaten first. Some complained that they were splitting hairs with an axe, but Levi was convinced, as were his father and grandfather before him, that these questions were practically a matter of life or death.          Jesus’ full-house audience that day at beside the lake was peppered with many men like Levi, men who’d come to hear this rabbi from Nazareth. Most wondered aloud, “Can any good thing come from such a place?”  They’d heard about him, and were curious to hear this teacher’s opinion about how to best thank the Creator for cut fruit, the right length for the tassels on one’s prayer shawl, and how to measure their strides on the Sabbath so they didn’t inadvertently work by taking one step too many. As he seated himself along the lakeshore in a prime spot, Levi knew he’d best be attentive. Jesus’ words would be additional kindling for the fiery discussion at the synagogue that would follow His visit to their area.        Imagine Levi’s surprise when Jesus didn’t talk about the proper way to bless a bowl of cut figs. He told a cluster of stories instead, telling His hearers about an odd kingdom He claimed was God’s where people were themselves the fruit. Levi knew the power of a story to make a point; he used the technique himself when a particularly slow-witted member of his congregation didn’t understand him.     Jesus’ stories were ridiculous…insulting even!  Levi was furious that Rabbi Jesus would tell the people a story that wasn’t even much of a story – it was simply a description of the life cycle of a seed. A seed!  What kind of a hoax was this?! How could a plant tell people more about God’s kingdom than a Law-loving man like Levi?   Levi considered himself a fair and open-minded man, but as he listened to Jesus, he absently fingered the tassels on his tallit and slammed his heart shut.     Amen. 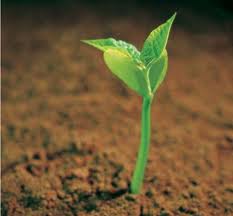 Jesus told those willing to hear Him that the process of a seed’s growth is a simile that can help us discover His kingdom here and now. A plot of ground, planted intentionally with seed, tells us exactly what we need to know about the way His kingdom works. There are many who believe they’re growing God’s kingdom by with beautifully-crafted religious technique. But all rules and methods can ever do is create a structure. We humans have the capability to build things, but are powerless to make growth happen.     Jesus’ little story, found only in the gospel of Mark, carries a heaven-sized message that tells us that we are barren earth, impotent to generate life or produce fruit. God’s kingdom is contained wholly in the seed – His life, planted in each of us who follows Him. The whole aim of the seed’s life is to come to maturity and be ready for harvest by the One who planted it in the first place. This parable isn’t a biology lesson. It’s about the mystery of His life lived in us.     And the world around us – every blade of grass, every shaft of wheat, every willow and thistle and palm is explaining the mystery to us.
Sharing is caring!