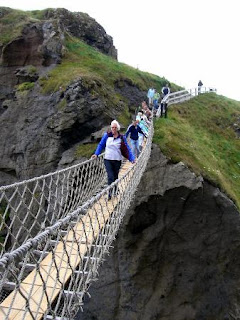 Transitions are the bridges from here to There in written and verbal communication. In part one of this three-part series, I offered some basic thoughts about how transitions serve as a sort of GPS, directing readers/listeners from point to point of an author or speaker’s idea journey. In part two of the series, I showed what happens when transitions are ignored in one especially potent form of communication – a church service. I created a generic example pieced together from years of sitting through services where people in charge may have thought about the specific element for which they were responsible, but often didn’t think about how or why to create bridges between these elements. (And in some cases, they didn’t think through the “why” the element was there to begin with, which meant that they often missed the point and purpose of the element entirely. But that’s another whole series of blog posts – or a book!)
If you’ve hung with me so far, then allow me to have a final look at this subject. I’ve re-imagined my imaginary church service, this time, with the kinds of bridges from here to There that are designed to help a group move through corporate worship together.
As the doors to the sanctuary open, a single individual is playing worship music on a keyboard. The music has the effect of hallowing the space and time, so as the congregation enters the room, they are being cued to shift gears and come together for worship. Those involved in leading worship (musicians, preacher/teacher, sound team) were gathered for prayer “off stage” in order to prepare their hearts and be receptive to what the Spirit was saying to the church that morning.
The worship leader took the stage and read a passage of Scripture and prayed that God would help the congregation give themselves freely in worship, responding to the One who’d given himself to them first.
Several songs grouped around the theme of the day’s message are sung, punctuated once with a brief and appropriate prayer of thanksgiving from someone in the congregation in response to the words of the song. As the sung worship draws to a close, a worship team member reads the text of an ancient prayer that echoes the theme for the day’s service.
The person giving announcements takes the stage, and welcomes all assembled to the gathering. The announcements of upcoming activities are brief, simple and clear – framed in terms of who the church is as a worshiping community. The church has recently decided to do away with “passing the plate” due to the leaders’ growing conviction that this Scripture applies to this practice coupled with the fact that many more members are giving using an online donation tool. The announcement-maker notes that there are offering boxes positioned near the back of the church.
The preacher then takes the stage and prays for the congregation – that they will live lives that give freely to God and to others, and that his/her words will be used of God to equip each one to follow Him more faithfully. S/he reads the day’s Bible text(s), then preaches a message that points people toward Jesus, and ends with some words designed to bridge from the text of the message to the next element of the service: communion.
A member of the congregation comes and reads a brief devotional thought s/he’s written about the day’s text that contains a brief corporate prayer of confession of sin. The worship leader allows some time for silent reflection, before speaking words about God’s grace and forgiveness over the people. S/he then reminds the congregation that God is inviting all of those who believe in Him to share in this meal together, and blesses those who are not yet believers, letting them know that they are free not to participate. As the worship team plays an instrumental piece of worship, the congregation is invited to come to one of the stations around the room that contains the elements, take them, and return to their seats.  As they do,  The worship leader reads 1 Cor. 11:23-26 and prays as the congregation takes the elements together. Two more songs of thanksgiving, then a congregation member comes to the front and reads a benediction over the congregation, blessing them as they head out into mission.
If you compare the haphazard assemblage of elements I described in Part 2, you’ll see some tweaks to some of those elements above. But if you look past the tweaks, you’ll see that the basic structure is pretty much the same – but the bridges – the transitions – are much stronger. With intentionality about good transitions, there is less room for ham-handed transitions (like “Go team!”) to do the heavy lifting of building a bridge from element to element.
Because I’ve been involved in worship planning in a variety of different settings, and because I am a writer who is forced by my vocation to contemplate how to create fluid transitions in my work, I am willing to confess that perhaps I am extra-sensitive when I see them omitted or dismissed in corporate worship.
Or am I? If you’ve lived through a few church services like the one I described in Part 2, did the lack of intentionality about the transitions bother you? Why or why not?