My last post was a five-minute intro on the importance of transitions in communication. (Click here to read it.) I ended the post with a bit of a teaser when I mentioned that there is one group of communicators who don’t always do much thinking about transitions.
I believe these people neglect transitions because they are often focused on specific chunks of communication. They aren’t thinking of the big picture. And because of that, their audience is often left to do too much of the work of connecting those individual chunks.
Just who are these neglectful communicators?
The ones I am thinking of are some of the people who craft corporate worship services, particularly in “low church”/non-denominational congregations. Churches that use tried-and-true set liturgy may also struggle to flow from movement to movement in a service, but they have the benefit of following a script that’s been tested by time. At least some of the bugs and hiccups of their church services have been worked out by their denomination’s early adopters generations ago.
Let me give you an example of what it is like to be in a typical evangelical church service where it appears no one in charge has thought through transitions. (Please note that this is an amalgam of every bad service of which I’ve ever been a part, not a report on the worship service I attended this morning.)


After the song finishes, he comments on the weather and the afternoon’s big football game, and then tells the congregation, “Let’s make sure if you cheer for the (insert team name here), you cheer even louder for our God this morning.” The congregation claps for God. He proceeds to lead the congregation in two more songs.


Another person takes the stage after the songs finish, and greets the congregation. She then launches into a series of announcements about upcoming church events and recruitment for VBS volunteers. The pastor takes the mic from her, asks the ushers to come forward to collect the morning’s offering. As they do this, a soloist sings a song to the congregation. When he finishes, the congregation claps for the singer.


The pastor returns to the mic, opens his Bible, prays briefly and launches into his message. When he finishes, he prays again, and the worship team returns to the stage. After a song, the worship leader reminds the congregation that today is Communion Day, and notes that they’ll be out of there in plenty of time for the Big Game. He flips open his Bible, reads 1 Cor. 11:23-26, and then instructs the ushers to pass the plates containing the elements. A couple of quick prayers over the elements, two more songs and it’s over. The congregation knows that when the musicians put their instruments down, the service is over. The worship leader ends with the uplifting words, “Have a good week! Go (name the team)!”

If you’ve ever attempted to participate in a service like this, you know that the potential for disconnect is ripe in both content and song selection. Often, the people planning a service (pastor and worship leader, at minimum) will do a little coordinating. “The text for my message is _____,” the pastor will tell the worship leader. “The theme of the message will be ____.”
The worship leader will use those cues to select some songs that sort of highlight that theme. (Or s/he will ignore the cue and choose songs s/he likes, thus creating dueling messages in a single service.)
A message with a few songs that kinda go with the message does not create a cohesive corporate worship service.
An unhealthy focus on the horizontal aspects of congregational gathering (coaxing performance out of a congregation by cuing them to “cheer for God”, too much chatter about sports teams) will smother worship. Too much vertical without including the congregation turns most of the congregation into spectators as well. Healthy congregational worship flows between the vertical and the horizontal:  some movements of a service are meant to connect us with one another (greetings, information about a community’s life together), some are meant to be vertical (music, offering), and some parts of a service are both vertical and horizontal (communion, sermon/homily).
Healthy services begin with leaders who are devoted to prayer and who understand deeply that their worship flows out being with God the other 167 hours of their week that they’re not in front of a live mic. But they require more than a good relationship with God. Those leading public worship must serve God and people by embracing their sacred role as narrator. Each service tells a story, and anchors us afresh to the big Story of which we’re a part.
And every good story is held together by its transitions.
Transitions – segue ways, shifts, bridges – help a congregation follow the flow of a service. Thoughtful transitions are designed to take the stress off of the congregation members who will work on their own to form connections between two disparate pieces of a service – or check out if the whole event seems like a random collection of stuff that’s somehow about God.
Leaders who care about transitions communicate deep intentionality, and this applies to free-wheeling Charismatic services just as much as it does to the more predictable services led by those with degrees from Fundy Bible U. Someone caring about transitions frees a congregation to “go with the flow” – and that flow actually creates space inside people’s heads and hearts for the Holy Spirit to speak. 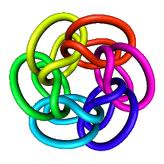 One simple question needs to be applied to each element of a corporate service: How does this part connect to what came before it?
The microphone holders need to think about those transitions with the same shepherding care that they use to approach their particular pieces of the service.

In my next post, I’ll take a look at how these bridges from here to There can change a service from a collection of disconnected elements into a story.