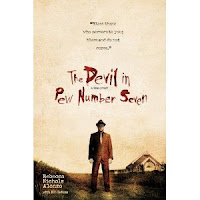 A campaign of terror waged by a church member furious at the changes a new pastor has brought to his little corner of the world ends in violence.

The story would be unbelievable…

…unless you’ve ever been in church leadership. Then, except for perhaps the degree, you’d recognize all the stock characters of the grim drama in Rebecca Nicols Alonzo’s compelling story, The Devil in Pew Number Seven (Tyndale, 2010)*. Veteran writer Bob DeMoss shaped the heartbreaking story leading to the violent death of her mother and the complete nervous breakdown of her father after a church member began a campaign to drive the young family out of town. When the usual church politics failed to work, this powerful man, Mr. Watts, escalated his game plan. Among other crimes, the church and the Nichols’ family parsonage was bombed a total of ten times over a span of several years. Still, in the face of this obsessive behavior of Mr. Watts and a handful of his cronies in their small southern town, the church continued to grow. Though another man pulled the trigger, killing Nichols’ mother, it seemed that Mr. Watts had created a spiritual environment around the family that allowed the violence to flourish.

Eventually both the shooter and Mr. Watts were tried and jailed. However, Pastor Nichols suffered a series of breakdowns as he was tormented by second-guessing his conviction that he needed to stand his ground in the face of Watts’ demonic persecution. Nichols died in his mid-forties, leaving his two young children orphaned. A loving aunt finished raising Rebecca and her brother to adulthood.

The story isn’t solely about the terror unleashed on this young family. Nichols emphasizes the power of forgiveness as the key to why she and her brother were able to survive and go on to serve God. “My need for God trumped my need to be mad at Him,” she writes. In the end, her willingness to forgive was a key to Mr. Watts receiving Christ while he was in prison.

The Devil in Pew Number Seven left me with some questions that no one can answer. I found myself second-guessing the wisdom of the family staying in place somewhere around bomb number six or so. I wondered why the church would continue to allow the pastor and family to stay, even buying them a trailer outside of the town in a safe place in which they could sleep at night. And I was troubled by the fact that even the feds didn’t seem to be able to put together enough evidence over the years to pin the crime on this small town thug of a man, until it was too late for Mrs. Nichols.

Of course, hindsight is 20/20, right? In the end, the example of Rebecca Nichols Alonzo and her brother being able to forgive is the real story here. Her story is of value for anyone who has been victimized by another person, and finds themselves imprisoned by the trauma of the past.

*I received a review copy of this book from the publisher.